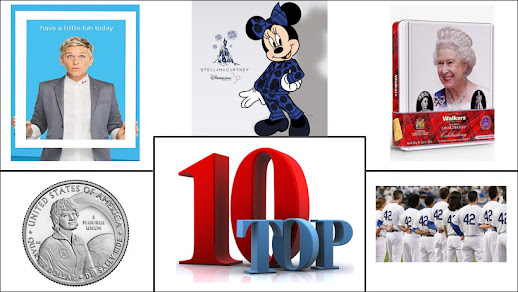 What do you remember from the 2022 marketing reel? What stood out as marketing innovation, and what will go down in history that was as memorable as Apple’s 1984 Super Bowl ad? Without further ado, let’s get to it!

NUMBER 10: Roe vs. Wade, the landmark piece of legislation that made access to an abortion a federal right in the United States, was overturned by the United States Supreme Court. The decision dismantled 50 years of legal protection and paved the way for individual states to curtail or ban abortion rights. This will impact all sorts of promotions and future elections. (June 24, 2022)

NUMBER 7: Major league baseball celebrated the 75th anniversary of Jackie Robinson’s debut with the Brooklyn Dodgers and breaking the color line in baseball. In recognition of this historic event, on “Jackie Robinson Day,” all players wore Jackie’s number “42” on their uniforms. (April 15, 2022)

NUMBER 5: In honor of International Women’s Day and the 30th anniversary of Disneyland Paris, the theme park dressed Minnie Mouse in a pantsuit instead of her timeless red and white polka dot dress. Minnie wore a blue polka dot pantsuit designed by Stella McCartney, and in true marketing fashion, a limited-edition Minnie Mouse t-shirt was available online and at Stella’s stores. (March 2022)

NUMBER 3: Social media platform Twitter began to unravel following Elon Musk’s purchase in October. Several haphazard decisions to change the platform were made as well as a majority of staff were fired or let go. As a result, many users migrated to other platforms, and one specifically, Mastodon, added millions of users in a short period of time. In addition, many brands stopped advertising on Twitter. (The acquisition of Twitter by Elon Musk began on April 14, 2022, and concluded on October 27, 2022.)

NUMBER 2: The founder of Patagonia, Yvon Chouinard, who previously expressed his reluctance at amassing wealth, gave away his company to help fight climate change. He explained, “We’re making Earth our only shareholder.” The outdoor apparel company is now in the hands of a trust and a nonprofit organization, and all future profits will be donated to fight climate change. (September 2022)

NUMBER 1: Queen Elizabeth II celebrated her Platinum Jubilee during the summer of 2022, and then sadly, she passed away at the age of 96 on September 8, 2022. Her reign of 70 years and 214 days was the longest of any British monarch and the longest verified reign of any female monarch in history, according to the BBC. This led to her eldest son Prince Charles becoming King Charles III, and his eldest son Prince William becoming the Prince of Wales. While all are predominantly ceremonial roles, the monarch still appears on all forms of postage and currency throughout the British Commonwealth which includes 54 countries around the world. So, consider the costs in changing from the likeness of the Queen to the likeness of the King – plus all the promotional items created as a result of the transition.

According to Charles Scarlett-Smith, Director of Brand Finance Canada, “When we’re thinking about Queen Elizabeth II’s brand, we really are being synonymous with the royal family and the monarchy. That brand alone ranks among the most valuable in the world. For a rough value comparison, putting the royal family’s impact up to a similar list of major corporate brands, the monarchy would rank fourth in the world, behind Google, Apple, and Amazon.”

And finally, to quote Camilla, the Queen Consort, “Queen Elizabeth II carved her own role as a solitary woman on a world stage dominated by men.”

What would you add to this list? Here's to 2023 and another year of marketing highlights. Happy New Year!