The #GivingTuesday Brand in 2015 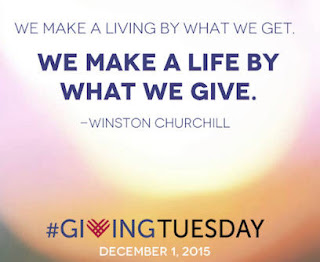 Since 2012, the Tuesday following Thanksgiving has been known as #GivingTuesday, a day dedicated to online philanthropy. What began as a partnership between the United Nations Foundation and the 92Y in New York City, a cultural center that connects people to the worlds of education, arts, health, and wellness, has grown into a global movement that has engaged over 30,000 nonprofit organizations in more than 65 countries.

According to the #GivingTuesday website: "Just think of a way for your family, your community, your company or your organization to come together to give something more – it can be time, knowledge, love, or donations of food, clothes, or money. Then tell everyone you can about how you are giving...Be a part of a global celebration of a new tradition of generosity."

As Kathy Calvin, President and CEO of the United Nations Foundation, explained, "Long associated with millionaires, philanthropy now belongs to everyone. Through technology and digital communications, people of all ages and all backgrounds can get involved in an issue, whether it’s making an online donation to a group on the other side of the planet or starting a petition to mobilize a community of advocates to push for change. The belief that anyone can make a difference is at the core of the United Nations Foundation’s work. Ted Turner created the UN Foundation because he believes that everyone – not just governments – can play a role in supporting the work of the United Nations, the organization with the global reach to drive big change. This community is about more than charity; it’s about change. People understand that resources are important, but they also want to be deeply engaged, learning about the issues and donating their time, ideas, and voices to help the UN save and change lives."

In the words of philanthropist Ted Turner, “You do not have to be a world leader – or even a billionaire – to make an impact. If we are going to turn things around, we all need to do our part to make it happen. Change starts with you.”

Some in the nonprofit sector might think that year-long outreach consisting of direct mail letters or cards, newsletters, emails, and annual reports have a bigger impact than a single day with a focus on philanthropy. But let's not forget the impact of publicity – and everyone will be talking about their favorite nonprofits on December 1st. The other important reminder is that social media will be on fire with the hashtag #GivingTuesday – and millennials, big social networkers, are future philanthropists. The "know your audience" mantra of marketing 101 demands that all nonprofits participate in #GivingTuesday with some type of campaign to target their existing and future donors.