Branding with an Ampersand 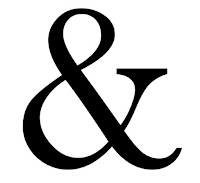 In case you missed it, September 8 was National Ampersand Day. An ampersand is that recognizable symbol that stands in for the word “and.” If your calendar did not include National Ampersand Day, this post can serve as your belated celebration as well as a reminder to add the date to your 2018 marketing calendar.

When creating a memorable business or nonprofit name, there are many considerations and influences, but if you want to join two names or words, what can you do? An ampersand is the solution.

According to Wikipedia, “The ampersand is a logogram representing the word AND (a conjunction). It originated as a ligature of the letters ET, Latin for AND…In written language, a logogram is a written character that represents a word or phrase.”

But where did the ampersand come from? According to Dictionary.com, "The symbol “&” was actually part of the English alphabet. In the early 1800s, school children reciting their ABCs concluded the alphabet with the &. It would have been confusing to say “X, Y, Z, and.” Rather, the students said, “and per se and.” “Per se” means “by itself,” so the students were essentially saying, “X, Y, Z, and by itself and.” Over time, “and per se and” was slurred together into the word we use today: ampersand.” (By the way, if you’re wondering, when a word is formed from an incorrect pronunciation, it’s called a mondegreen.)

How many brands featuring ampersands immediately come to mind?

Did you realize that there were so many?

“Each of these [brands] has a unique approach to the ampersand they use. Some use the same font as the brand name (logotype), while others use a completely different font for the ampersand. The style for these all depends on the emphasis the brand wants to create with the ampersand. Using an ampersand can provide added benefits, aside from aesthetics. If a brand name is slightly long, using an ampersand will help shorten the length of the logotype. This means you don’t sacrifice legibility for size, especially for web and digital media," explains Nicte Cuevas, Principal of Nicte Creative Design (Twitter: @NicteCreativDSN).

While there are countless ways for a brand to stand out, don’t forget the ampersand. It’s so much more than a space saver. In fact, it just may get your brand noticed.


Final Note: It seems as if there has been an abundance of ampersands in the restaurant industry. Check out: https://www.welldonemarketing.com/2015/10/dear-restaurants-hold-the-ampersand-please/
Posted by DebbieLaskeyMBA No comments: