Leaders Don't Have to Be the Star of the Show! 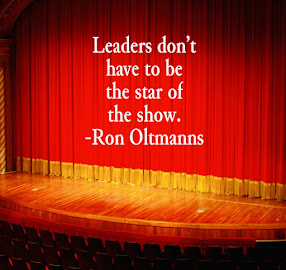 Today, in honor of the final game day of the 2022 football season, I welcome Ron Oltmanns to my Blog for a Q&A discussion about leadership with a final question that relates to football. As a member of the Twitterverse for more than 13 years, I always enjoy meeting new people and learning from them. To quote Matthew Kobach (@mkobach), "Twitter is a key that unlocks thousands of doors, some of which you never even knew existed." Highlights of my conversation with Ron follow a brief introduction.

Ron Oltmanns is the founder of Leadskill, a consultancy specializing in developing leaders and teams for business impact. He has more than 25 years of experience in consulting and education with much of that time spent coaching and training business people. Based on his work in the corporate arena, small businesses, and startups in the United States and Asia, he has developed deep perspective on what makes people successful and what gets in their way. Leadskill has conducted workforce assessments, psychometric testing, and leadership development programs in multiple countries. Born in Venezuela, Ron grew up in the United States, and also lived in Asia for eight years. Now a Texan, he lives in Houston, with his wife Angela, and they have two grown sons.

QUESTION: You use your Twitter introductory space to say, "The best investment a leader can make is their self awareness and their team's emotional intelligence." Can you please elaborate?
RON OLTMANNS: Self awareness is a tricky thing. Most people would say they have it, and way more than half of the leaders that I talk to think they have above average self-awareness, which is impossible. How could 80-90% of leaders be above average?!

I have found that ALL leaders (myself included) could benefit from greater self-awareness. When leaders admit that they aren’t as self-aware as they’d like to be, but they’re working on it, something interesting occurs. I’ve noticed that it almost always results in their team's paying more attention to their own emotional intelligence. Greater emotional intelligence (EQ) pays a big dividend. People take better care of customers, and they work better together when they grow their EQ.

[Note: According to Wikipedia, Emotional intelligence is most often defined as the ability to perceive, use, understand, manage, and handle emotions.]

QUESTION: You feature something called a FEELINGS WHEEL on your website. Can you please explain?
RON OLTMANNS: A key part of emotional intelligence is being aware of what you’re feeling. Research at UCLA several years ago proved that when you can name what you’re feeling, you’re much better able to manage your emotions.

Most of us have a pretty limited working vocabulary for what we’re feeling. A feelings wheel has an expanded set of feeling words arranged in a logical way so that you can find the right word to express what you’re feeling. Just doing that can increase your self-awareness, and when you are able to share specifically what you’re feeling with others, it creates a more empathetic and supportive environment at work. The feelings wheel is a great tool for making emotions more discussable.

[Readers can learn more at this link: https://leadskill.com/feelings-wheel/; and there are also several different versions of the wheel for beginners to advanced users in the online shop.]

QUESTION: On a post on your blog entitled "The Myths of Leadership," you wrote, "Leaders are only as strong as the people who follow them." Can you please share highlights from that inspiring post?

RON OLTMANNS: As I grew in my career and interacted with more leaders, I found that the usual stereotypes of leaders that I carried in my head were just wrong. Myths, like leaders, are just born that way, or “leaders” are loud and powerful people are two misconceptions. I shared a couple more in that post.

We tend to think of leaders as powerful and charismatic people that can move a group of people. That’s sometimes true. But I’ve noticed it’s much more common to find leaders who are pretty ordinary people who are surrounded by bright and talented people.

SHARE THIS: When people are willing to follow or yield to a leader, that gives them power. ~@ronoltmanns #LeadershipTip #DebbieLaskeysBlog

QUESTION: If you could have dinner with any three leaders from history or the current era, who would you choose, and why?
RON OLTMANNS: This is a fun question! Of course there are many I’d like to have dinner with, but here are three that come to mind.

[1] Socrates. He was famous for asking questions and guiding people to examine the flaws in their beliefs. According to his students, he was a great dinner guest and maybe he was the first real executive coach.

[2] Confucius. I got to live and work in China for several years, and they have the oldest living civilization on the planet. There are many myths about Confucius, and I’d like to really meet the man himself and see what he would say about China today as well as his views on modern society and how we could make it work better for everyone.

[3] Margaret Thatcher. Besides being the first female Prime Minister of the United Kingdom, she had a great influence in the 1980’s when I was growing up. The UK was not the most powerful nation on earth, and I’d like to talk with her about how to lead with influence when you can’t command people and just flex your power.

QUESTION: One of my favorite leadership quotes is from author and consultant Mark Herbert (@NewParadigmer on Twitter): "Leadership doesn't require you to be the smartest person in the room. It requires you to block and tackle for others." What does this quote mean to you?
RON OLTMANNS: In American football, blocking and tackling are fundamental skills you have to learn and drill. Blocking is how you run plays, whether it's rushing or passing the ball. Tackling is fundamental defense; unless you tackle the guy with the ball, they’re going to score on you.

So, the quote says you don’t have to be the smartest person in the room, meaning the leader doesn’t have to be the star of the show. If they block for others or tackle the opponent, they’re creating a team. Leaders realize that a good team can run circles around a lone superstar. Without blocking and tackling, you don’t have a functional team — just 11 individuals on the field. Leaders with a good functioning team will mow down individual stars every day.

SHARE THIS: The leader doesn’t have to be the star of the show. ~@ronoltmanns #LeadershipTip #DebbieLaskeysBlog

My thanks to Ron for sharing his leadership insights and for appearing here on my Blog...who else is looking forward to the Super Bowl and the ads? Check back following the Super Bowl game for my annual review of the ads.