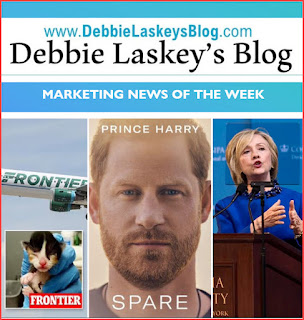 FRONTIER AIRLINES
Frontier Airlines is known for featuring animals on the wings of its airplanes who serve as representatives of their species, but this week, its advocacy and passion for wildlife conservation went one step further. The airline offered free flight vouchers for people who adopt one of three kittens from the Las Vegas Animal Foundation. The kittens will be adoption-ready once they hit six weeks of age. The person who adopts "Spirit" or "Delta" will be gifted two flight vouchers, each valued at $250, for a total of $500 per forever (furever) family. And the pet parents who adopt "Frontier" will receive four $250 vouchers for a total value of $1,000. This type of marketing is a purr-fect way to attract cat and animal lovers.

PRINCE HARRY'S MEMOIR
According to CNN Style:
"Prince Harry has set a record with his tell-all memoir SPARE after the English language version sold more than 1.4 million copies in its first day of publication. Sales included all formats of the book (paper, audio and electronic) in the United States, Canada and the UK, according to a statement issued Wednesday, January 10th, by the book's publisher Penguin Random House. The first full day of sales of SPARE represents the largest first-day sales total for any nonfiction book ever published by Penguin Random House, the world's largest trade publisher. Random House also said the first United States printing of Harry's memoir was 2 million copies, and now the book has gone back to press for additional copies to meet demand. SPARE went on sale in 16 languages worldwide."

Will readers be surprised by the Prince's honesty, and will they tire of his complaints and finger-pointing at the dysfunctional Royal Family?

PROFESSOR HILLARY CLINTON
New York City's Columbia University announced that former Secretary of State, First Lady, and first female candidate to run for President in the modern era Hillary Clinton will join as professor of practice at the School of International and Public Affairs and as presidential fellow at Columbia World Projects in the 2023-2024 school year. She will focus on supporting female leaders and engaging women and youth around the globe. She explained, "Columbia's commitment to educating the next generation of U.S. and global policy leaders, translating insights into impact, and helping to address some of the world's most pressing challenges resonates personally with me. I look forward to contributing to these efforts." How will the addition of Clinton impact Columbia's marketing efforts during the next year? Time will tell.

Due to this Ivy League university's exciting news, here are a couple of my favorite Hillary Clinton quotes:

"You're never too young to change the world. You just have to get started."

"We still have not shattered that highest and hardest glass ceiling. But some day, someone will."

What other marketing news stood out to you this week?

What will be the marketing buzz next week? Tune in to read all about it.


One final note from Britannica.com: "The first woman to actively pursue the country's highest office was Victoria Woodhull, a stockbroker, newspaper publisher, and champion of social reform who ran for the presidency in 1872, nearly 50 years before women throughout the United States gained the right to vote. Woodhull was an outsider candidate in more than a few ways. Not only was she a female candidate at a time when women could not vote, but also, at age 31, she was four years too young to serve as president, according to the requirements of the U.S. Constitution. However, the mostly middle-class advocates of women’s suffrage, notably Susan B. Anthony and Elizabeth Cady Stanton, carefully distanced themselves from Woodhull, whom they considered an eccentric."