Marketing News of the Week: Prayers for Damar and GM 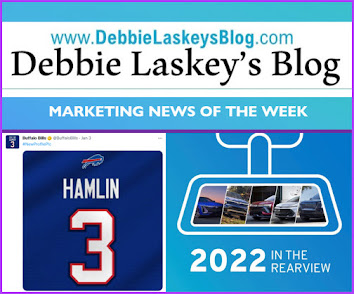 PRAYERS FOR DAMAR
After the nation watched Buffalo Bills football player Damar Hamlin collapse on the field during the Monday Night Football game between Buffalo and Cincinnati, everyone held their breath. In an unprecedented sight, players on the field of both teams kneeled and prayed together. Minutes ticked by, followed by the appearance of an ambulance, and then the ambulance took Damar to a local hospital. Broadcasters were speechless. The NFL ultimately postponed the game, and fans in the stands and viewers at home knew that something terrible had happened. While sports fans awaited news over the next few days, all 32 NFL teams changed their Twitter profile pictures to Damar’s name and number. This show of support proved that “Sports is important. And suddenly it’s not,” according to ESPN’s Scott Van Pelt. In addition, the hashtag #PrayersforDamar trended on Twitter. How can the NFL go forward with its marketing following this event? Perhaps, there will be a very memorable ad during the Super Bowl - and if Damar recovers by then, perhaps, the ad will feature him.

GENERAL MOTORS (GM)
According to CNN, “One year after losing the title it held for nearly a century as the top car seller in America, General Motors is back on top.” GM reported US sales of 2.3 million vehicles, which was a lower number than in past years because production was impacted by a shortage of parts, primarily computer chips. How will this news impact GM's marketing during 2023?

What other marketing news stood out to you this week?

What will be the marketing buzz next week? Tune in to read all about it.