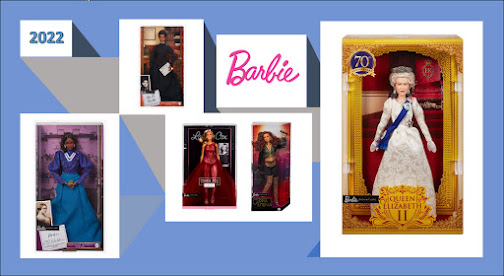 During 2022, Barbie dolls made news. Usually, the international doll is not very newsworthy, but Mattel introduced five new Barbie dolls during 2022 to celebrate important women, their accomplishments, and their views.

But first, a little history about Barbie…

In 1945, Ruth and Elliot Handler started their company, Mattel, combining Elliot's name with the last name of their partner, Harold Matson. In 1956, the Handlers took their two teenage children, Barbara and Ken, on a trip to Europe, and during the trip, they saw a doll that looked like an adult woman. This doll was much different from the baby dolls that most little girls played with back in America.

Ruth was inspired, and three years later, Mattel’s version of the adult doll, which she named after her daughter, was unveiled and became a big success. The Barbie doll also had a wardrobe of outfits that could be purchased separately. In 1960, the Handlers took Mattel public, and Barbie quickly became an icon, with a wardrobe and career options that mirrored women’s changing goals.

Ruth Handler said in a 1977 interview with The New York Times, “Every little girl needed a doll through which to project herself into her dream of her future. If she was going to do role-playing of what she would be like when she was 16 or 17, it was a little stupid to play with a doll that had a flat chest. So, I gave the doll beautiful breasts. And Barbie kept pace with the times. During Camelot, she sported a Jacqueline Kennedy hairdo. During the 1970’s, her career choices and outfits begin to change to include a doctor, astronaut, and veterinarian, among others. My whole philosophy of Barbie was that through the doll, a girl could be anything she wanted to be. Barbie always represented the fact that a woman has choices.”

Mattel has created numerous Barbie dolls as part of its Inspiring Women Series to honor both historic and contemporary heroines with the hope of inspiring “generations of girls to dream bigger than ever before.”

Here are the five that were introduced during 2022:

Ida B. Wells:
An educator, journalist, anti-lynching activist and NAACP Co-Founder. Her doll was accompanied by a historically significant accessory: a miniature replica of the Memphis Free Speech, the newspaper where she became editor and co-owner in 1889. (January 2022)

Queen Elizabeth II:
Dressed in royal attire, the doll celebrated the monarch’s Platinum Jubilee. John Lewis, the British retailer, sold out its supply in three seconds. The doll was just one of the lucrative memorabilia items created to celebrate the Platinum Jubilee – spanning everything from fine China to teddy bears, tea towels, fridge magnets, food tins, and more. (April 2002)

According to Kate Williams, a London-based history professor, “It’s incredibly important for children to see female leaders who have impacted history in their dolls, from Frida Kahlo to Amelia Earhart and now the Queen. It brings home the importance of women’s contributions to the world, the impact of women as leaders, creators, and pioneers, that women’s achievements are important and should be celebrated.”

Laverne Cox:
An actor, author, and LGBTQ rights advocate, and the first transgender person to have a Barbie designed after her. Launched on Cox’s 50th birthday, a Mattel spokesperson said the company was “proud to highlight the importance of inclusion and acceptance at every age with this doll.” (July 2022)

Gloria Estefan:
The doll celebrated the 33rd anniversary of the Grammy Award-winner’s chart-topping 1989 hit, “Get on Your Feet.” The doll marked the singer’s 65th birthday and was unveiled on the eve of National Hispanic Heritage Month. (August 2022)

Madam CJ Walker:
The first US self-made female millionaire, known for her entrepreneurial skills as she built her haircare and cosmetic brand from scratch. She was also known for her philanthropic and social justice efforts including her contributions to the NAACP anti-lynching movement. (August 2022)

To quote the BBC, “It is estimated that over a billion Barbie dolls have been sold worldwide in over 150 countries, with Mattel claiming that three Barbie dolls are sold every second.”

These inspiring dolls from 2022 are not just toys, they teach. Who will Mattel introduce in 2023?