What's Your Favorite Brand the Day After Christmas? 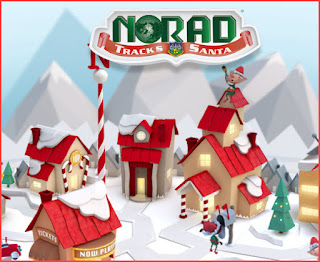 Today is December 26th. The packages have been opened. The wrapping and bows are all over the living room carpet. The holiday meal is cooking in the kitchen. So, what is your favorite brand today?

I'd like to send a shout-out of gratitude to the team at NORAD for the Santa tracker, found online, via mobile apps, and via telephone. More than 1,250 Canadian and American uniformed personnel and DOD civilians volunteer their time on December 24th to answer thousands of phone calls and emails that arrive from around the world.

You may be wondering, what exactly is NORAD? Here are important details from the official NORAD Santa Tracker website:

"The North American Aerospace Defense Command (NORAD) is a United States and Canada bi-national organization which defends the homeland through aerospace warning, aerospace control, and maritime warning for North America. Aerospace warning includes the monitoring of man-made objects in space, and the detection, validation, and warning of attack against North America whether by aircraft, missiles, or space vehicles, through mutual support arrangements with other commands…Headquartered in Colorado, NORAD's mission has evolved over the years to meet changing threats. Through outstanding bi-national cooperation, NORAD has proven itself effective in its roles of watching, warning, and responding. The men and women of NORAD are constantly watching the skies and waterways of the United States and Canada."

You may be wondering, how did the NORAD Santa Tracker start?

“The modern tradition of tracking Santa began in 1955 when a young child accidentally dialed the unlisted phone number of the CONAD Operations Center (the predecessor of NORAD) upon seeing a newspaper ad telling kids to call Santa. The Director of Operations, Colonel Harry Shoup, answered the phone and instructed his staff to check the radar for indications of Santa making his way south from the North Pole.

Thus, a tradition was born, and every year since, NORAD has reported Santa’s location on December 24 to millions of children and families across the globe. Every Christmas Eve, thousands of volunteers staff telephones and computers to answer calls and emails from children around the world. Live updates are provided through the NORAD Tracks Santa Web site (in seven languages), over telephone lines, and by email to keep curious children and their families informed about Santa’s whereabouts and if it’s time to get to bed.

What is the technology behind the NORAD Santa Tracker?

"It all starts with the NORAD radar system called the North Warning System. This powerful radar system has 47 installations strung across Canada's North and Alaska. NORAD makes a point of checking the radar closely for indications of Santa Claus leaving the North Pole every holiday season. The moment our radar tells us that Santa has lifted off, we begin to use the same satellites that we use in providing air warning of possible missile launches aimed at North America."

Satellites are located in a geo-synchronous orbit (that's a cool phrase meaning that the satellite is always fixed over the same spot on the Earth) at 22,300 miles above the Earth. The satellites have infrared sensors, meaning they can see heat. When a rocket or missile is launched, a tremendous amount of heat is produced – enough for the satellites to see them. Rudolph's nose gives off an infrared signature similar to a missile launch. The satellites detect Rudolph's bright red nose with no problem.

The other system used is the NORAD jet fighter. Canadian NORAD fighter pilots, flying the CF-18, take off out of Newfoundland and welcome Santa to North America. Then at numerous locations in Canada, other CF-18 fighter pilots escort Santa. While in the United States, American NORAD fighter pilots in either the F-15s, F16s, or F-22s get the thrill of flying with Santa and the famous Reindeer – Dasher, Dancer, Prancer, Vixen, Comet, Cupid, Donner, Blitzen, and Rudolph. Even though Santa flies faster than any jet fighter (Santa actually slows down for the Jets to escort him), all of these systems together provide NORAD with a very good continuous picture of his whereabouts."

Website, Phone Number, and More:
For more information about NORAD Tracks Santa, visit www.noradsanta.org – so you’ll be ready to track Santa’s journey next year. The NORAD Tracks Santa Operations Center is fully operational beginning at 4 AM MST on December 24th. You can call 1-877-HI-NORAD (1-877-446-6723) to talk directly to a NORAD staff member to relay Santa's exact location. Operators are available until midnight.

See you next year, Santa!