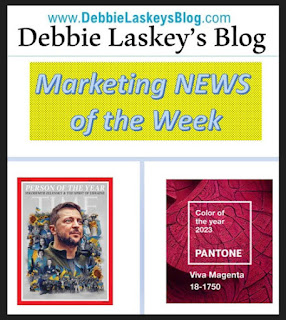 This was a big week for marketing news. The week began with the official announcement by the Pantone color company of the color of the year for 2023. Later in the week, TIME Magazine announced its Person of the Year for 2022. With all the chaos in the world including the Covid pandemic, the war in Ukraine, and the holiday season, this news was welcomed by those of us in the marketing field.

According to Pantone:
“Viva Magenta is an unconventional shade for an unconventional time. Vibrating with vim and vigor, a shade rooted in nature descending from the red family demonstrating a new signal of strength. Viva Magenta writes a new narrative…Brave and fearless, a pulsating color whose exuberance promotes optimism and joy. Powerful and empowering, it is an animated red that encourages experimentation and self-expression without restraint."

Pantone’s color institute executive director Leatrice Eiseman explained, “Viva Magenta is a harmonious hue that descends from red, with hints of pink and purple. It is empowering, a new animated red that revels in pure joy, encouraging experimentation and self-expression without restraint. It is a color that is audacious, full of wit and inclusive of all. In this age of technology, we look to draw inspiration from nature and what is real.”

According to E-News:
“The electrifying hue, a sort of big sister to the popular Barbie pink trend, is all about embracing one's boldness in the New Year. Magenta was also chosen for its hybrid-like qualities since it blends the old with the new. After all, it not only has historical value but is a window into the future.”

According to The New York Times:
“President Volodymyr Zelensky of Ukraine was named TIME Magazine’s person of the year on Wednesday in recognition of his leadership during his country’s war against Russia. The magazine also recognized “the spirit of Ukraine,” pointing to the country’s resilience in a rebuke to President Vladimir Putin of Russia. The closely watched honor marks the latest step in a remarkable ascent that has seen Mr. Zelensky catapulted from a career as a television comedian, first to the presidency in 2019 and then, this year, to the status of a leader with global stature. The Ukrainian leader, who has come to personify the nation’s resistance since Russia launched its full-scale invasion in February, has characterized the war as a struggle by a peace-loving people seeking freedom from tyranny.”

According to NPR:
“Much of the world has spent the last year watching the war in Ukraine as the country defends itself from Russian attacks and asserts its identity on the global stage. So, it may not come as a surprise to many that President Volodymyr Zelenskyy and the spirit of Ukraine are officially Time magazine's Person of the Year for 2022. The magazine, which has bestowed the honor annually since 1927, released the announcement on Wednesday alongside a lengthy profile of the wartime leader. It credits his stewardship of Ukraine's defense — which has halted Russia's advance and regained key territories — as well as its public image.”

"Whether one looks at this story of Ukraine with a sense of hope or a sense of fear, and the story is, of course, not fully written yet, Zelenskyy has really galvanized the world in a way we haven't seen in decades,” said TIME Editor-in-Chief Edward Felsenthal.

Do you agree with these choices? Should Pantone have picked a different color? Does this year’s version of red energize you?

And what about Mr. Zelensky? Was he your choice for Person of the Year? Or, would you have picked the Supreme Court as a result of their overturning the landmark Roe vs. Wade decision? Or how about the Iranian protestors? Or what about Elon Musk due to his takeover as owner and chief decision-maker of Twitter? Or what about Queen Elizabeth, whose death was mourned by people around the world after her astonishing 70 years on the throne?

And then, there were some other folks that made news during 2022: Serena Williams retired from professional tennis; Prince Harry announced the publication of his biography entitled Spare – but then postponed release of the book to January 2023 due the death of Queen Elizabeth II; Kanye West, aka, YE, made news for a variety of reasons throughout the year; House Speaker Nancy Pelosi stepped down as Democratic party leader after two decades at the top; Karen Bass was elected as the first African-American woman to serve as Mayor of Los Angeles; and Bob Iger returned as CEO of The Walt Disney Company after retiring in 2020.