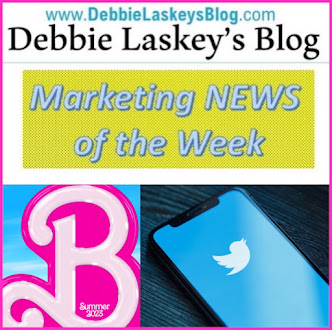 BARBIE THE MOVIE
Warner Brothers Pictures unveiled a short trailer for its movie, #BARBIETHEMOVIE, which will arrive in movie theaters on July 21, 2023. The music and theme of the trailer referenced the classic movie "2001: A Space Odyssey." According to Fandom, "Life in plastic, it's fantastic."

Mattel’s Barbie has become one of the world’s most popular dolls. Introduced in 1959, the Barbie doll owes its success to adapting to the ever-changing markets of various cultures and countries by launching Barbie dolls of shapes, colors, and sizes, and customizations to the inhabitants of certain regions. Because Barbie has often been criticized for representing an unattainable beauty ideal for girls and women, the doll has evolved both in style and shape over the years. The Barbie brand also honors pioneering women from throughout history.

TWITTER
Twitter, translation owner Elon Musk, suspended the accounts of several prominent journalists from The New York Times, CNN, Washington Post, and more. According to the journalists, no explanations were provided by Twitter. Journalist Tony Webster, who was permanently suspended said, "Twitter had become the heartbeat of news and society. Banning journalists for doing their jobs is not the free speech Elon Musk promised."

On a related note, Mastodon's account was also suspended. Mastodon is the social media platform where many Twitter users have moved as a result of Musk's purchase of Twitter.

What marketing news stood out to you this week?

What will next week's marketing news be? Tune in to read all about it.