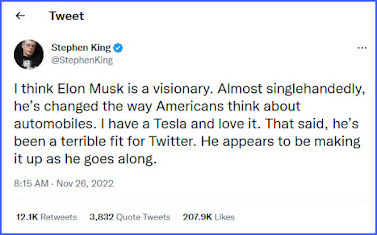 With Elon Musk and Twitter in the news every day since Musk took over Twitter, those of us who used Twitter for good are saddened as to the direction of this social media platform.

To quote Matthew Kobach (@mkobach), "Twitter is a key that unlocks thousands of doors, some of which you never even knew existed."

So what happens now? Many tweeps (people on Twitter) have left the platform. Some have migrated to Mastodon, and some have taken a hiatus.

Unfortunately, we are starting to see a dramatic increase in hate speech resulting from Musk's termination of staff to monitor content and a lack of content monitoring leading to the spread of misinformation regarding the covid pandemic - not to mention the return of specific individuals who will misuse the platform.

As a result, here are some things I will miss now that Twitter has changed:

[1] Will there, or can there, ever be another famous Oreo Tweet, like in 2013? If live events are not discussed in real time on Twitter, and brands no longer participate, this type of fun content may never happen again.

[2] During the Super Bowl, fellow marketing pros discuss the ads in real time. This was always a fun exchange using a myriad of hashtags including #BrandBowl, #SuperBowlAds, #Advertising, #KelloggBowl, #SuperBowlExp, #BigGameColorCommentary, and more. This type of convo will have to move to another platform, but will it be as stimulating?

[3] I have always enjoyed leading TweetChats and participating in TweetChats. These are different than webinars and Zoom meetings, and I've met people from all around the world during these unique get-togethers to discuss interesting marketing and leadership topics.

[4] When breaking news happens, the first place I turned was to Twitter. Whether it was a police chase, a fire, an earthquake, or election results, Twitter was the place for an update.

[5] People always showed their creativity in their bios. Carefully crafted in only 140 characters, bios often told people's stories. Whether a title was "Chief Happiness Officer," or "Brand Architect," or "Jungle Cruise Skipper," the uniqueness of a person's bio was an invitation to Tweet hello or follow and connect.

What about you? What will you miss about Twitter? Have you migrated elsewhere?

If you're on Mastodon, let's connect. Here's my link:
https://techhub.social/@DebbieLaskeyMBA