Marketing News of the Week: Redesigned Logos, Word of the Year, and Co-Branding 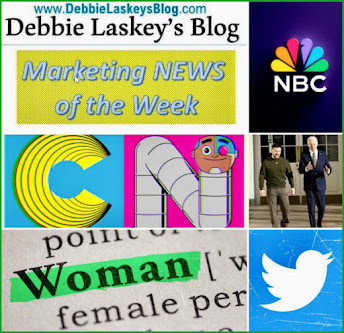 This week saw some interesting marketing news including some logo redesigns and unveilings, an announcement of one entity's word of the year for 2022, and an international co-branding display. However, we cannot ignore the ongoing news from Twitter, ranging from a new release of the verified check mark for a fee of $11 a month, square profile images for brands, and the announcement by Elon Musk that he will resign as CEO when he finds someone "foolish enough to take the job."

NBC
NBC announced that it would start the new year with a brand refresh. While the logo was unveiled in the fall, the new card/curtain raiser, aka, the brandmark, animation, and chimes that kick-off NBC programming will debut during Miley Cyrus' New Year's Eve special on December 31st. The new logo balances the space between the feathers on NBC's peacock, and a white outline was removed. Also, the peacock's beak was extended for legibility.

CARTOON NETWORK
The company unveiled its first new look in ten years. The new logo features a split screen with vibrant colors to spread the message that Cartoon Network is a fun brand, according to Jacob Escobedo, Senior VP of the network, "a new look designed to feel vibrant, fun, and exciting."

HISTORIC VISIT TO THE WHITE HOUSE & CONGRESS
President Volodymyr Zelensky of Ukraine visited the White House, met with President Joe Biden, and gave a speech to members of Congress on December 21. According to CNN, "Zelensky delivered his address in English...even his attire - the now-familiar Army green shirt, cargo pants and boots - seemed designed to remind his audience that they were in the presence of a wartime leader." The financial support promised by the Biden Administration to Ukraine to fight Russia represents the core of co-branding because both parties want the same result.

WORD OF THE YEAR
Dictionary.com selected "woman" as its word of the year for 2022. Searches for the word on the site doubled during 2022 when compared to previous years. During the Supreme Court confirmation hearing for Judge Ketanji Brown Jackson, she was asked, "Can you provide a definition for the word 'woman'?" She responded that she could not. As Jim Joseph reminded us in his commentary, during 2022, Roe vs. Wade was overturned and women began mass protests in Iran. As this marketing news shows, words do matter.

ARGENTINA WINS THE WORLD CUP
While Argentina beat France to win the World Cup this week, and many people around the world were glued to their TV's, radios, and other devices to watch the action, many of us have yet to become international soccer fans. It would seem, therefore, that there is an incredible marketing opportunity.


What marketing news stood out to you this week?

What will next week's marketing news be? Tune in to read all about it.