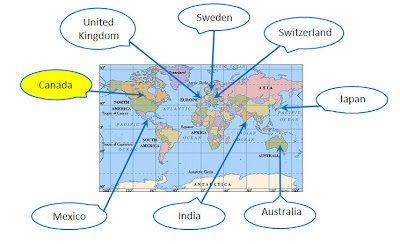 Thanks to Google Doodles, archery, diving, fencing, gymnastics rings, and field hockey have been in the limelight. With the Games of the XXX Olympiad well underway, many medals have been awarded. My Olympics-themed series is also well underway. In the words of Vala Afshar, "Don't do social, be S.O.C.I.A.L., which means be sincere, open, collaborative, interested, authentic, and likeable." To coincide with the festivities in London, I am featuring experts from around the world who will share their insights and answer questions about social media. Tune in every couple of days to see which country will be represented and who will be featured. And if you comment during the Olympics on Twitter or elsewhere in social media, don't forget to use the hashtag #London2012.

Today, two experts are chiming in from Canada. Kim Lavigne is a social media manager at A Major Media and also a songwriter in Quebec, Canada; and Ray Hiltz is a social media strategist and owner of Communications NewRayCom in Montreal, Canada. You can connect on Twitter with Kim @freedomwalker77 and with Ray @newraycom.

Both Kim and Ray agree that Facebook is the most popular social networking site in Canada.

From Ray:  We have privacy laws, and in fact, in 2009, Canada was the first country to take on Facebook for playing loose with personal information. Evidently, they came to an agreement. We also have the Personal Information Protection and Electronic Documents Act (PIPEDA), which is scheduled for review this year, and there is hope that the government will strengthen it, as concern has been expressed by the privacy commissioner that too much personal data is collected and distributed by social media sites.

From Kim: To promote products with contests, ads, and free services.

From Kim: Social media was meant to be social…engage in conversations with people and be social.

From Ray: Don’t think of social media as strictly a marketing tool. When you are planning a social media strategy, make sure it dovetails not only with your marketing plan but also with your overall business strategy.

From Kim: Improvements in speed and memory will greatly impact future iterations of these devices.

From Ray: While 40% of the 20 million Canadians who use mobile devices use smartphones, Android is the preferred operating system. (Apple, what are you doing about that news?) I see enormous growth as the Federal government moves to deregulate the telecommunications industry, which keeps costs artificially high.