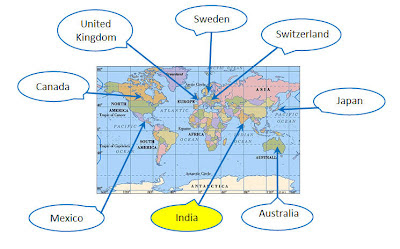 The Games of the XXX Olympiad are beginning their second week, and sadly, my Olympics-themed series is rounding the curve with the end in sight. To coincide with the festivities in London, I wanted to commemorate the special event on my blog. So, to create an international dialogue about the evolution of social media, I have invited experts to answer questions and share their insights. In the words of Vala Afshar, "Don't do social, be S.O.C.I.A.L., which means be sincere, open, collaborative, interested, authentic, and likeable." Tune in every couple of days to see which country will be represented and who will be featured. And if you comment during the Olympics on Twitter or elsewhere in social media, don't forget to use the hashtag #London2012.

Today's expert is Pervara Kapadia, a social media expert based in Mumbai, India. You can connect with Pervara on Twitter @PervaraKapadia.

With over 51 million users, India ranks as the third largest market for Facebook. Twitter is also a popular site.

At a corporate level, people are developing policy and procedure manuals, but at the national level, privacy legislation is still in development.

How are major businesses in your country using social media as a marketing tool to promote products or services?

The largest brands in India are Tata Docomo, Fastrack, Kingfisher, Vodafone Zoozoos, and Nokia India. These brands are leveraging social media to connect with customers and obtain feedback.

It’s important to focus on relevant content as well as frequency.

According to a Gartner report from earlier this summer, four significant forces will shape businesses in India during the next five years: IT, mobile, cloud, and social media. The adoption of new technologies will be driven by individuals who are young, well-educated, and tech-savvy.