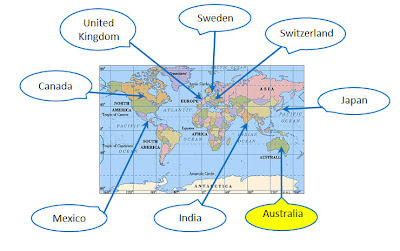 While it seems as if the Games of the XXX Olympiad just started, they are nearing their end – just like my Olympics-themed blog series. To coincide with the festivities in London, I wanted to commemorate the special event. So, to create an international dialogue about the evolution of social media, I invited experts to answer questions and share their insights. In the words of Vala Afshar, "Don't do social, be S.O.C.I.A.L., which means be sincere, open, collaborative, interested, authentic, and likeable." Don't forget to tune in for the final series post this weekend. And if you comment during the Olympics on Twitter or elsewhere in social media, use the hashtag #London2012.

Today's experts are from Australia. Annemarie Cross is a branding strategist, business/career coach, and regular podcaster based in Melbourne; and Zoe Herbert Routh is a leadership and life coach based in Canberra. Zoe's tagline is "Better leaders, better business, better life." You can connect on Twitter @AnnemarieCoach or @AnnemarieCross and @zoerouth.

From Annemarie: Recently, Sensis and the Australian Interactive Media Industry Association conducted a survey and created the Yellow Social Media Report: What Australian people and businesses are doing with social media. This is their data. Facebook continues to be the most popular social media platform here in Australia, capturing 97% of social networking users – but the number of people using LinkedIn and Twitter has increased. Unlike the USA, while a sizable majority of Australians are consistently engaging with social media, only 27% of small businesses (which has increased from 14% last year) and 34% of medium-sized businesses currently have a social media presence. Large businesses seem to be more established on social media with 79% claiming to have a presence.

From Annemarie: There are a number of government websites with available information to educate the general public on this topic. There are also some programs in schools to educate youth about what is appropriate and what is not when it comes to social media.

What ways are major businesses in your country using social media as a marketing tool to promote products or services? Please share examples.

[1] Communicate with clients and contacts to build a relationship: We see many businesses using their Facebook business pages. In fact even our local TV and radio stations are following this principle with their Facebook pages and encouraging listeners/viewers to visit their pages to comment on a particular topic. As you can imagine, this creates a huge amount of buzz on a company’s Facebook page.

[2] Invite online comments and reviews: This is a great way to gain feedback directly from consumers. I heard about a serviced-based company (a graphic designer) who was re-branding, so their creative team came up with some concepts, posted them on their Facebook page, and asked fans to comment and select the design which they believed best fit their brand – this was a great example of how to use social media to gain insights from a company’s community and existing customers.

[3] Offer incentives for consumers: We see this increasing with larger businesses with ads on both TV and radio encouraging viewers/listeners to visit their Facebook business pages and commenting and/or entering a competition to win a gift (or enter their name into a drawing for a major prize). This sparks many new likes and interaction (whatever it is they need to do to be eligible for the drawing).

From Zoe: Integrated dialogue with stakeholders and clients.

[1] An awesome example is Qantas Airways: Travelers could put their name on an airplane, share on Facebook, etc. Also, the official Twitter account for Qantas Customer Care, @QFCustomerCare, describes itself as follows: “We're here to listen to customer service experiences and rectify customer issues. Online Monday to Friday 9am-to-5pm AEST.”

[2] Another awesome example was The Voice Australia: contestants shared live tweets during the show, on the show's website, and you could vote for contestants through Facebook and iTunes. Half the fun was reading the Twitter conversation during the show.

From Zoe: Don't dilute your efforts by trying to do everything. Pick one or two media channels and focus on giving value, having a conversation, and building/contributing to a community.

From Zoe: Smartphones and tablets will lead to the end of desktop computers. They will also add to the surge in mobile purchases and consumer driven reviews for screening purchases. Payments and research using mobile technology will soon dominate. And who carries cash anymore? That's going away too.

NEXT POST WILL BE THE SERIES FINALE!
Posted by DebbieLaskeyMBA