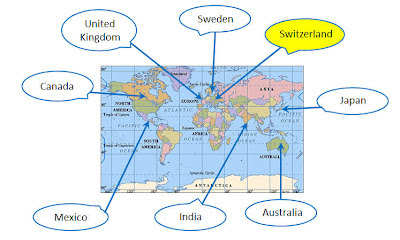 With the Games of the XXX Olympiad well underway, so is my Olympics series. In the words of Vala Afshar, "Don't do social, be S.O.C.I.A.L., which means be sincere, open, collaborative, interested, authentic, and likeable." To coincide with the festivities in London, I am featuring experts from around the world who will share their insights and answer questions about social media. Tune in every couple of days to see which country will be represented and who will be featured. And if you want to comment during the Olympics on Twitter or elsewhere in social media, don't forget to use the hashtag #London2012.

Today's expert is Olga Henggi, a Business/Life Consultant and English Language Trainer in Basel, Switzerland. She provides customized business and communications strategies in both German and English. You can connect with Olga on Twitter @olgahenggi.

Facebook, XING, and LinkedIn are the most popular social networking platforms in Switzerland. As of March 2012, XING had more than 12 million members worldwide who use the site to boost their businesses, jobs, and careers. The platform is operated by XING AG, which was founded in Hamburg, Germany, in 2003. While XING and LinkedIn are normally used by business people, according to some reports, nearly one in three is on Facebook. In fact, 82% of Swiss in the 18-63-year-old demographic are on Facebook.

Swiss legislators often have very little personal experience regarding social networking and social media. For this reason, they tend to protect privacy rather strictly.

Be focused and keep moving forward. If you employ a ghostwriter for a corporate blog, involve that person 100% in your business.

It’s difficult to say at this moment in time, but the Swiss are well-equipped. Teachers sometimes have problems at school because children use their smartphones at school. Also, some companies ban online access so that employees have fewer distractions while at work. But people are connected on the social web.