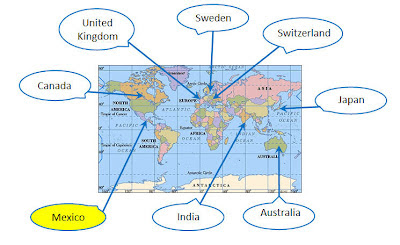 With the 2012 London Olympics now underway, in the spirit of international goodwill, I would like to present something unique on my blog during the Olympics. In the words of Vala Afshar, "Don't do social, be S.O.C.I.A.L., which means be sincere, open, collaborative, interested, authentic, and likeable." So, during the Olympics, I am featuring experts from around the world who will share their insights and answer questions about social media. Tune in every couple of days to see which country will be represented and who will be featured. And if you want to comment during the Olympics on Twitter or elsewhere on social media, don't forget to use the hashtag #London2012.

Today's expert is Edna Campos, a Social Media Marketing Consultant based in Mexico and founder of Riolan Virtual Business Solutions. She helps small businesses and entrepreneurs create a solid online presence. You can connect with Edna on Twitter @RiolanVirtualBS.

Our country issued the final version of its Regulations of the Federal Law for the Protection of Personal Data Held by Private Parties. However, it applies mostly for businesses, eCommerce and other websites, and for all professions in which personal or sensitive written or digital data is handled. The updates to the first draft include:

Regarding social media marketing, unfortunately, there are still no regulations whatsoever. The elected president Enrique Peña Nieto had been working on a draft. We'll know more next year when he becomes president.

I believe in planting as many seeds as possible (Guy Kawasaki’s quote), listen carefully to your audience. It’s not about you anymore, but about your audience's likes, wants, problems or concerns. Also, be consistent and genuine.

While smartphone usage has doubled compared to 2010, currently, smartphones are used in a very small percentage to make online purchases. Most of the activities are for search purposes and to connect with friends through social media and gaming.