What Brand Stands Out on Thanksgiving? 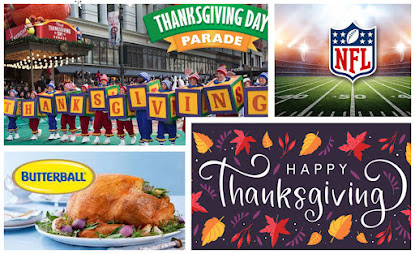 What brand represents Thanksgiving? I challenge you to pick a single brand.

For me, it's a toss-up between these three.

MACY’S THANKSGIVING DAY PARADE
Whether you live in New York City or anywhere else, there is a particular parade that, since 1924, has become a family ritual to watch in person or on television. The three-hour parade is held from 9am to 12noon Eastern time on Thanksgiving Day, and it has been televised nationally on NBC since 1952. A unique aspect of working at Macy’s is that Macy’s employees have the option of marching in the parade. Would you march?

BUTTERBALL TURKEY
Have you ever tried to cook a 15-pound or 25-pound turkey and run into trouble? Have no fear, if the turkey is a Butterball. This brand has a help center called the "Turkey Talk Line." This help center began in 1981 when six home economists worked the phones that holiday season to answer 11,000 turkey-cooking questions. Since then, the Turkey Talk Line has grown in both the number of calls answered and the number of experts who respond. The Turkey Talk Line is open November and December each year and is staffed with 50 experts who answer more than 100,000 questions, for thousands of households in the United States and Canada. And in today’s social era, cooks can connect with the Turkey Talk Line via social media, live chat, texting, and even Amazon Alexa.

NATIONAL FOOTBALL LEAGUE (NFL)
Thanksgiving is all about traditions, and after the Macy's parade and the turkey meal, the final tradition is to sit on the comfortable couch in the den or living room with family and watch a football game. According to Wikipedia, "Since its inception in 1920, the National Football League has played games on Thanksgiving Day, patterned upon the historic playing of college football games on and around the Thanksgiving holiday."

Here are the games for this Thanksgiving:

According to the NFL's website, "The NFL on Thanksgiving is a longstanding tradition led by the Detroit Lions and Dallas Cowboys having annual games. This will be the Lions' 83rd Thanksgiving game and the Cowboys' 55th."

So, whatever tradition you and your family enjoy, and whatever brands stand out to you, here's wishing you a Happy Thanksgiving!