Tips to Avoid Extra Noise When Speaking in Public 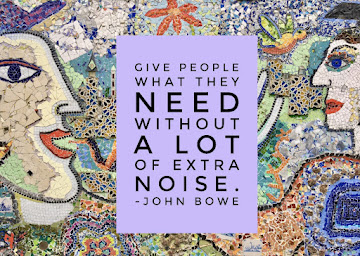 To quote Matthew Kobach (@mkobach), "Twitter is a key that unlocks thousands of doors, some of which you never even knew existed." As a member of the Twitterverse for almost 13 years, I always enjoy meeting new people and learning from them. I recently connected with John Bowe and invited him to appear here on my Blog in a Q&A format to talk about public speaking. Highlights of our conversation follow a brief introduction.

Based in New York City, John Bowe is the award-winning author of I Have Something to Say: Mastering the Art of Public Speaking in an Age of Disconnection (Random House, August 2020). He is a speech and presentation consultant specializing in corporate and individual presentations; and has worked with entrepreneurs and executives from all over the world, as well as students, activists, and charity leaders. John contributes regularly to CNBC about public speaking and has written for The New Yorker, The New York Times Magazine, and GQ, among other magazines, and is the author, editor, and co-editor of numerous books. His work has been featured in the Harvard Business Review, The New York Times; and he has appeared on CNN, The Daily Show, with Jon Stewart, the BBC, and many others.

QUESTION: In your cover image on Twitter, you wrote, "I have something to say - mastering the art of public speaking in the age of disconnection." Can you please explain?
JOHN BOWE: While working as a journalist, not a speech or communications expert, I accidentally discovered that speech training accomplishes what many people seek through psychiatry, therapy and meds. It teaches people the mental and verbal techniques for connecting to others. It’s a simple technical skill, but it has a huge emotional payoff.

I followed my curiosity and discovered Toastmasters, which led me to the ancient Greeks and Romans who invented speech training. In their own pre-scientific way, they’d found this amazing way of educating people to interact and socialize better than we normally know how to do without training. The payoff was huge for individuals, but it also had a beneficial effect on society. Speech training became the core subject of higher learning for 2,000 years, the key skill for anyone planning to work in an organization. And now we don’t learn this stuff, and shockingly, people don’t know how to connect very well with one another. I put our lack of speech training at the root of modern speech anxiety, isolation, partisanship, lack of trust on every level, and it suddenly looks like a potential remedy for a lot of modern problems in America and everywhere else.

QUESTION: Why do you think most people fear public speaking?
JOHN BOWE: People fear public speaking for the same reason that they fear flying airplanes, because they’ve never been taught to do it. I think most of us ascribe it to some kind of mental or psychological problem. “I’m speech anxious.” “I’m shy.” The problem is me. It kills me that we don’t teach speech in school anymore. Ten hours of education, and I think at least half of all people would get over half their problems with public speaking. Once you see it as an art form that you can learn, it lifts a huge emotional burden. It’s actually relatively easy to learn.

QUESTION: What is the most common error that people make when speaking in public?
JOHN BOWE: People want to seem smart when speaking to a group. So when we get on stage, the Zoom call, the job interview, etc., we tend to rattle off a bunch of facts and data and slides and blah blah. And it’s boring. And disconnected. And the talk ends, and no one feels very good or enlightened or smart.

The best way to be smart in public speaking is to be clear, focused, brief, and relevant. It’s counter-intuitive for modern people, but thinking about who you’re talking to - and why - is the primary plane of focus. Facts come afterwards. It’s the easiest thing in the world to figure out, but it’s so obvious, most people can’t see it.

TWEET THIS: The best way to be smart in public speaking is to be clear, focused, brief, and relevant. ~@JohnFBowe #PublicSpeakingTips #DebbieLaskeysBlog

QUESTION: You wrote a post for CNBC entitled, "Avoid These 5 Types of Words and Phrases that Make You Sound 'Immature.'" Can you provide a recap?
JOHN BOWE: My definition of public speaking comes from Aristotle, so it’s weird by modern standards. Public speaking basically just means translating your thoughts from inside your brain to the world outside. Whether you’re talking about small talk or a TED talk, the same principles apply. It’s all about paying attention to your audience and their needs.

To a degree, the root of authority comes from being able to give people the information they need without constantly, unconsciously inserting yourself. And immaturity is kind of the opposite.

When you talk too much about yourself or water down your message with tics, you seem unprofessional. If you repeat stuff with your mouth that you’re already displaying on your slides, you’re wasting people’s bandwidth. When you use too many filler words like, “you know” or indulge yourself in too many unnecessary asides – same deal. Making apologies like, “Oh my god, this deck is such a mess. I’ve been so busy. My mother-in-law was visiting” – you’re just presuming someone wants to hear it in the middle of their busy day! Business jargon, “low-hanging fruit” and all the rest — it doesn’t make you look smarter; it makes you look pretentious.

So, as always, it really comes down to being able to give people what they need without a lot of extra noise.

TWEET THIS: Give people what they need without a lot of extra noise. ~@JohnFBowe #PublicSpeakingTips #DebbieLaskeysBlog

QUESTION: Which three people alive today inspire you with their public speaking presence, word choice, and delivery?
JOHN BOWE: Dave Chappelle, Michelle Obama, and Oprah. This isn’t a racial commentary. I just don’t know of anyone else who comes close to them.

QUESTION: When I was in graduate school two decades ago, a guest speaker did something memorable. He taped a ten dollar bill to the wall at the front of the room. As people entered the room, their eyes were drawn to the money, and everyone wondered why the bill was on the wall. Once the speaker began his presentation, he explained that there was a typo in one of his slides, and the first person to catch the typo would get the ten dollars. Everyone paid attention to the presentation and read the slides. And one student got the ten dollars. What are some secrets you'd like to share?
JOHN BOWE: Visuals are powerful. People often remember them even if they forget the rest of a talk. But I think the only way to find those visuals is to focus on the basics first. If you really, really hone the purpose of your talk, whatever it is, and you organize your ideas really clearly, you’ll find great visual ways of demonstrating your ideas as you practice. I think the same is true for humor.

My thanks to John for sharing his public speaking insights and for appearing here on my Blog.

Image Credit: Giulia May via Unsplash.