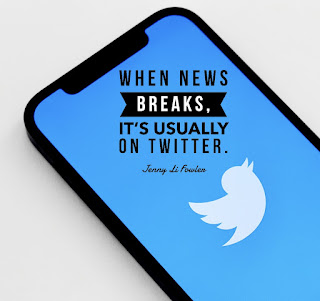 To quote Matthew Kobach (@mkobach), "Twitter is a key that unlocks thousands of doors, some of which you never even knew existed." As a member of the Twitterverse for nearly 13 years, I always enjoy meeting new people and learning from them. I recently connected with Jenny Fowler and invited her to appear here on my Blog in a Q&A format. Highlights of our conversation follow a brief introduction.

Jenny Li Fowler is the director of social media strategy at Massachusetts Institute of Technology (MIT) in Cambridge, Massachusetts. She is in charge of developing and executing Institute-wide social media initiatives and campaigns. She provides social media consultation and direction for more than 200 departments, labs, and centers; and manages the Institute’s flagship Twitter, Facebook, Instagram, and LinkedIn accounts. She can be found on Twitter @TheJennyLi and on LinkedIn at www.linkedin.com/in/jennylifowler.

QUESTION: What does this quote mean to you? “Give something of meaning to your audience by inspiring, engaging, and educating them with story. Stop marketing. Start storytelling. ~@StorytellerAgcy”
JENNY FOWLER: I’ve never considered myself a marketer. Every position I’ve had throughout my career has centered around storytelling, only the medium has changed. People will pay attention to content because it makes them FEEL something and that always involves a story, whether the audience realizes it or not. The story may be one of hope or inspiration, or how to solve a problem, or forming new habits. My talent is telling the stories of people and organizations better than they could have told it themselves.

QUESTION: What's your favorite marketing campaign, and why?
JENNY FOWLER: Right now, I’m really enjoying Chick-fil-A’s “The little things” campaign. The commercials with people sitting on a red couch telling stories about Chick-fil-A’s employees going above and beyond. I don’t think I paid too much attention to them at first, particularly because I do not always agree with Chick-fil-A’s politics and philosophies, but this campaign has grown on me. They never talk about their products, only their people, and it started to make me separate the people that work there from the company itself. So the campaign is working, on me, at least. When I listen to these touching stories of their employees doing the sweetest things to make a difference in other people’s lives, it makes me like the employees, and yeah, I might buy a chicken sandwich from them.

QUESTION: Many people remember the famous OREO Tweet during the 2013 Super Bowl. With that in mind, what's your favorite social media marketing campaign, and why?
JENNY FOWLER: I don’t necessarily see that Tweet as a campaign. To me, it was more of a really great social media moment. One that aligned with Oreo’s culture but a moment none-the-less. I recently wrote about creating content that intersects your culture with the current moment...you can read the article at this link (https://sproutsocial.com/insights/organic-social-content/).

There have been so many great social media moments, not sure I can pick just one favorite. Here are three that come to mind:

QUESTION: What is your favorite social media platform or platforms for brand-building, and why?
JENNY FOWLER: I think ten social media managers would give you ten different answers. I think this depends on your goal,  your strategy, the audience you’re trying to reach. But for me, it’s Twitter. I personally really like the platform and feel that’s where the current conversation really takes place. When news breaks, it’s usually on Twitter.

QUESTION: What do you think will be the central focus of our social media marketing discussions a year from now?
JENNY FOWLER: I think it will be on how highly specialized the skills are within social media. I think the conversation will no longer be about being in all of the spaces but in finding the right one or two platforms to meet your goals. And I think, by then, social media positions will have become specialized, you will have your vertical video specialist, live stream specialist, social media copywriter. You get the idea, and you will build your team accordingly. Gone will be the days of a single social media manager doing everything.

TWEET THIS: A year from now, gone will be the days of a single social media manager doing everything. ~@TheJennyLi #socialmediamarketing #DebbieLaskeysBlog

My thanks to Jenny for sharing her inspiring social media insights and for appearing here on my Blog.