Some Monday Morning Quarterbacking about the Ads from Super Bowl 56 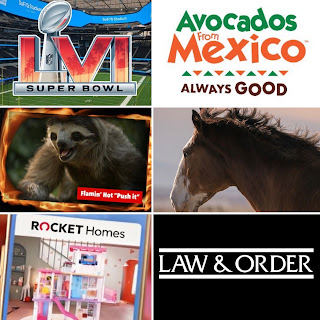 Super Bowl 56 "the game" was definitely more exciting than in years past, but the ads were mostly so-so. While the game was played in a new stadium that cost $5.5 billion near Los Angeles, the ads cost nearly $7 million for thirty incredibly short seconds. What do you remember from Super Bowl Sunday?

There was no ad similar to Apple’s 1984 ad. There was no ad that was as memorable as Budweiser’s post-9/11 ad from 2002 with the kneeling Clydesdales. There were no animated Coca Cola polar bears, and there was no Tweet memorable enough to rival Oreo’s from 2013 - although Oreo did share some clever Tweets during the game. And one thing to note for this year's batch of ads: no brand mentioned the Covid-19 pandemic, which was a complete reversal from last year's ads.

However, this quote from Landor Associates IS timeless: "Here are three tips to help you, your dad, or even your football-crazed grandma decide which brands scored a touchdown with their commercials: Is the ad on-brand? Will you remember the brand tomorrow? And, does the ad speak to the times?”

Here were the ads that stood out to me from this year’s group:

AVOCADOS FROM MEXICO: The ad featuring a tailgate party at Rome’s Coliseum was funny, clever, and memorable. Since tailgate parties were happening in real time, it was fun to see what they might have looked like a long time ago.

FLAMIN’ HOT DORITOS: This ad featured a group of animals in an unlikely situation: they liked flamin’ hot Dorito chips, which, while hard to believe, created a laugh or two.

BUDWEISER: The return of the Clydesdale horses was welcomed – especially since they were absent last year, and although, a horse got injured, he did get well. In addition, the friendship between a dog and a horse was touching. These ads are always memorable.

ROCKET MORTGAGE: As a fan of the Barbie doll by Mattel as a child, I also had Barbie’s Dream House. So, when Barbie wanted to purchase her Dream House with help from Rocket Mortgage and Rocket Homes, I appreciated the brand storytelling.

LAW & ORDER: NBC ran several ads to promote the return of its classic show, Law & Order, the original – which, as a long-time fan, I eagerly look forward to seeing again, thus, a thumbs-up from me.

Timothy Calkins, Marketing Professor at Northwestern University's Kellogg School of Management, tweeted, “A question for all the auto marketing executives: Is saying you have an electric vehicle enough? Seems like Tesla is the perceived leader with the best electric cars. How do you win the competitive battle?”

I responded to Calkins' tweet: "It would have been better for the ads to show how an electric vehicle could improve life."

And lastly, a few words from Jacques de Cock, a faculty member at the London School of Marketing: "The Super Bowl is a phenomenon unsurpassed in the world. It is one of the few national social events, which is also why social media traffic during the game is so high...What is also remarkable is that advertising is not viewed as something to skip but is seen by 77 percent of viewers as part of the entertainment, and therefore, more watched and engaged with than any other television advertising during the year."

Are you counting the days to Super Bowl 57, scheduled for February 12, 2023, at State Farm Stadium in Glendale, Arizona? I sure am!

To read any of my previous Super Bowl ad recap posts, search this Blog using the term “super” to access all the complete links.

To watch all the ads from Super Bowl 56, here’s the link:
https://www.cnet.com/news/super-bowl-commercials-2022-watch-all-the-big-ads-before-sundays-big-game/