2021 Was the Year of #BRANDIDENTITY Changes 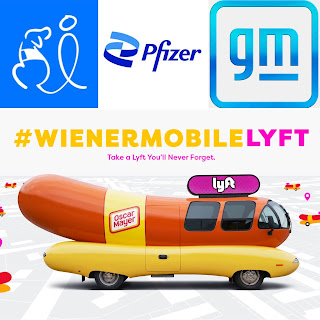 Was your brand in the news during 2021? If not, don’t despair. There were many other brands that made headlines during 2021.

Here’s a recap of 15 interesting brands that either rebranded, changed their logo, co-branded, or changed their name during 2021.

* The 2,800-unit sandwich chain Jimmy John's began the year with a new look and logo for typography, packaging, illustrations, and uniforms.

* Major league baseball team the Cleveland Indians transitioned to the Cleveland Guardians. The decision to change the team's nickname was a desire to be more inclusive, which led to a survey of 40,000 fans and 140 hours of interviews with fans, community leaders, and front-office personnel. According to the team, "When facing the 43-foot "Guardians of Traffic" that have stood tall for nearly 100 years on the Hope Memorial Bridge, Progressive Field looms in the background. The two are now forever connected, the sculptures that have served the city as beacons of progress now trickling over to the city's baseball team."

* Auto brand Volvo changed its logo for the first time in seven years. Named "Volvo Iron Mark," the logo is the same shape as the male symbol and the scientific symbol for iron.

* Auto brand General Motors unveiled its new logo with a nod toward its electric future, since it resembles an electric plug. The new logo was tied into a new marketing campaign entitled, "Everybody In," which laid the groundwork for the automaker as it aimed to put drivers into electric vehicles (EVs) and begin the slow march away from the internal-combustion engine.

* Oscar Mayer, the packaged foods brand marketed by Kraft Heinz, partnered with Lyft to add its signature Wienermobile into the ride-hailing app's fleet. Lyft users in New York City, Chicago, Los Angeles, and Atlanta had the opportunity to be picked up by the 27-foot hot dog vehicle. Driven by two five-star-rated "Hotdoggers," Wienermobiles were decked out with music, neon lights, free shirts, and hot dog masks. This campaign was unveiled in the midst of an overhaul of the Oscar Mayer brand, a 138-year-old brand that struggled during the COVID-19 pandemic.

* Fast-food chain Burger King underwent the biggest brand evolution in more than 20 years with a new color scheme, uniforms, a custom font called "Flame," and an overhauled logo. A designer for the brand explained that the new logo "can be seen better on the small screen, clearly important during the digital age in which more orders are being made using smartphones."

* Food brand Velveeta changed its logo and tagline. With more people staying and cooking at home during the COVID-19 era, food brands have become more prominent. Another Kraft brand, Philadelphia cream cheese was more often MIA on supermarket shelves throughout 2021.

* Drug manufacturer and COVID-19 vaccine maker Pfizer unveiled its most significant brand refresh in 70 years with a new logo. The company began a shift in 2019 away from a diverse collection of consumer brands to a more science-driven agenda creating prescription drugs and vaccines.

* Nonprofit organization Canine Companions for Independence changed its name, tagline, and logo. The organization changed its name to Canine Companions and its tagline to "Lead with Independence." According to the press release, "The new logo captures the belief that the human-canine bond makes us all stronger. The dog and human connect to form a unified, heart-like shape, underscoring the strength of the relationship and illustrating how service dog teams help each other feel empowered and valued. Additionally, the human is based on the letter "I" to connect back to the life-changing independence that Canine Companions service dogs provide."

* Social media icon Facebook rebranded and became known as Meta. Facebook and its family of apps (Instagram, Messenger, WhatsApp) will be a division of a larger Meta company still led by founder Mark Zuckerberg that will also focus on AR (augmented reality), VR (virtual reality), and metaverse efforts. On December 1, the company's stock ticker changed from FB to MVRS.

* Retail brand The Dollar Store added $1.25 and $1.50 price points. So, how can the store known for selling everything for one dollar continue to operate with the same name? Won't the brand identity be damaged? How can "Dollar Days" continue? Talk about misleading brand identity.

* The Israeli city of Tel Aviv took over the rein from Paris and Singapore as the world's most expensive city. Is that a moniker that a city would like? How does that impact marketing the city from a travel perspective?

* The California city of Los Angeles unveiled a new logo inspired by sunsets and car culture. While the Los Angeles Tourism & Convention Board wanted a memorable logo, nothing can rival the "I Love New York" tagline when it comes to city brands. Will the new logo still be around during the 2028 Summer Olympics? Time will tell.

* Staples Center, the home of the Los Angeles Lakers and Clippers since 1999, will be no more. AEG announced that Staples Center would be renamed Crypto.com Arena in December.

With all these changes, one wonders if brands that don’t make changes have staying power. Do logos need to be refreshed every so often? Do brand names need to change every so often? How do these changes impact brand equity and customer/fan/stakeholder recognition? These are important questions to consider before making any strategic branding changes.

What brand change stood out to you during 2021? Please chime in.