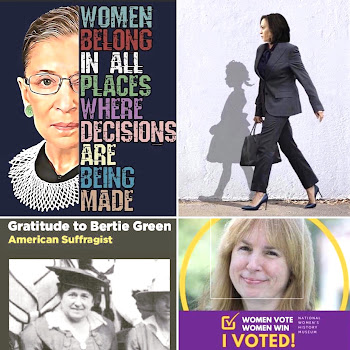 While 2020 will be known as the year of the Covid-19 pandemic, we also celebrated the 100th anniversary of the 19th Amendment, which granted women the right to vote. However, based on many events that took place during 2020, it appears that 2020 was also the year of women and their amazing and inspiring accomplishments.

To quote Eleanor Roosevelt, "A woman is like a tea bag; you never know how strong it is until it’s in hot water."

Here are the names and the events that made HERstory during 2020:

"While I may be the first woman in this office, I will not be the last — because every little girl watching tonight sees that this is a country of possibilities." - Kamala Harris (November 7, 2020)

Keisha Lance Bottoms, Governor of Atlanta, on the Joe Biden-Kamala Harris' historic win: "It's great for me to see it happen, but I'm also happy that my mother gets to see it, and my daughter get's to see it, because this is so much that so many generations have hoped for."

DR. JILL BIDEN - First "First Lady" in 230 years with four degrees including a doctorate in educational leadership, has plans to maintain a paying job outside the White House. She will continue teaching English at Northern Virginia Community College, where as Second Lady, she advocated for students and education after high school.

"As I work hard every day to inspire my students, it is ultimately they who inspire me."  - Dr. Jill Biden

RUTH BADER GINSBURG - Due to the passing of RBG, her legacy inspired millions of girls and women to get involved in politics, the law, and standing up for others.

"Women belong in all places where decisions are being made." - RBG

KIM NG - First female General Manager hired by the Miami Marlins major league baseball team - and first woman hired to be the GM by any of the professional men's sports teams in the North American major leagues.

"I entered major league baseball as an intern and, after decades of determination, it is the honor of my career to lead the Miami Marlins as their next General Manager." - Kim Ng

HOLLY MITCHELL - With the election of Holly Mitchell to the Los Angeles County Board of Supervisors, a once-all-white-male institution will now be led by five women.

Janice Hahn, a member of LA's Board of Supervisors, said she hopes the novelty of having five women on the Board wears off eventually, but she’d like to celebrate it for a little longer. “We’ve once again broken a glass ceiling right here in Los Angeles County."

According to the Los Angeles Times, "For the first time since the board’s inception more than 150 years ago, the powerful Board of Supervisors will consist of all women, each of whom comes with significant backgrounds in politics and government. I can’t think of another example in the entire United States where you will have five women having control of ... the largest county in the entire country just in terms of people, but also the largest county budget in the entire country,” explained Ange-Marie Hancock Alfaro, a professor and chair of gender studies at USC.

According to Alan Blinder, a Princeton University economist who served with Yellen on the Fed’s Board in the 1990s, "If she becomes Secretary, when she goes into a room with finance ministers from other countries, she's going to be the best prepared person in the room - probably the smartest person too."

According to Julia Coronado, founder of economic-advisory firm MacroPolicy Perspectives, "One of her underappreciated talents is the ability to drive a consensus in pretty convincing ways."

Back in 2013, I wrote a blog post about Yellen's appointment - here's the link:
https://debbielaskey.blogspot.com/2013/10/what-kind-of-leadership-legacy-are-you.html

Other quotes that continued to inspire during 2020:

Priyanka Chopra's father: "Don't try to squeeze into a glass slipper. Instead, shatter the glass ceiling."

Hillary Clinton: "Whether I am meant to or not, I challenge assumptions about women. I do make some people uncomfortable, which I'm well aware of, but that's just part of coming to grips with what I believe is still one of the most important pieces of unfinished business in human history: empowering women to be able to stand up for themselves."

Chelsea Clinton: "One of our core values in this country is that we are the land of equal opportunity, but when equal hasn't yet included gender, there is a fundamental challenge there that, I believe, having our first woman president - whenever that is - will help resolve." (2016)

Michelle Obama: "When you've worked hard, and done well, and walked through that doorway of opportunity, you do not slam it shut behind you. You reach back and you give other folks the same chances that helped you succeed."

Nancy Pelosi: "I would say that one of the things that encouraged me so much when I became elected to the leadership was the letters I received from fathers of daughters, saying that, ‘My daughter can now do many more things because of what you did.’”

Sheryl Sandberg of Facebook: "If you're offered a seat on a rocket ship, don't ask what seat."

Shirley Chisholm: “If they don’t give you a seat at the table, bring in a folding chair.”

Ayanna Pressley: “I wanted to fight for girls, not be their voice, but to lift up their voices.”

Meghan Markle, Duchess of Sussex: "With fame comes opportunity, but it also includes responsibility — to advocate and share, to focus less on glass slippers and more on pushing through glass ceilings. And, if I'm lucky enough, to inspire."