What Are Your Favorite New Year's Brands? 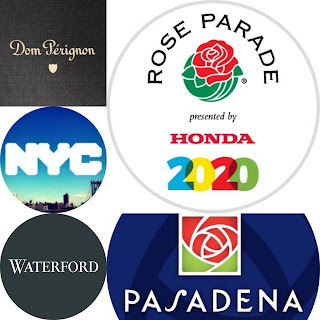 The December holidays are within view, and this means that the new year is on the horizon ripe with resolutions and exciting opportunities.

When you think of New Year's Eve and New Year's Day, there are many brands that come to mind. Which brands are your faves? Here are five of mine.

DOM PÉRIGNON
Many of us drink in the new year with champagne, and while a bottle may cost several hundred dollars - and the most costly bottle has been known to cost $42,000 - Dom Pérignon is the world's most well-known champagne.

For some interesting facts about Dom Pérignon, visit: https://vinepair.com/articles/14-facts-dom-perignon-champagne.

CITY OF NEW YORK
Every year on the final day of the year, everyone's attention is on the city known as "The Big Apple." New York City has hosted a memorable New Year's Eve party every year since 1907, with the exception of 1942 and 1943. Hundreds of thousands flock to Times Square to watch a truly brilliant event: the crystal ball drop as the final seconds of the year tick away toward midnight, ushering in a new year. According to the Times Square website: "Thanks to satellite technology, a worldwide audience estimated at over one billion people watch the ceremony each year. The lowering of the Ball has become the world's symbolic welcome to the New Year."

For a myriad of fun facts about the history of the Times Square Ball, visit: https://www.timessquarenyc.org/times-square-new-years-eve/nye-history-times-square-ball.

CITY OF PASADENA
After the world's attention leaves New York City on December 31st, it turns to America's west coast, specifically a Southern California suburb of Los Angeles. Home to approximately 140,000, Pasadena's population swells to the hundreds of thousands, possibly even a million, each year on January 1st. The city's main street is Colorado Boulevard, and that is where the action begins around 8am every January 1st.

ROSE PARADE
The attraction on New Year's Day in Pasadena, California, is the annual Rose Parade, hosted by the Pasadena Tournament of Roses Association. According to Wikipedia, "First held on January 1, 1890, hundreds of thousands of spectators watch the Rose Parade in person, and millions more watch it on television - both in the U.S. and in more than 100 international territories and countries worldwide. The Rose Bowl college football game was added in 1902 to help fund the cost of staging the parade. Since 2011, Honda sponsors the Rose Parade. Accordingly, the company has the parade's first float, which like all floats, follows the parade's theme."

During 2020, we will celebrate the 100th anniversary of the 19th Amendment, which granted women the right to vote. With this in mind, here are some women's and girls' equality brands:
* League of Women Voters
* National Women's History Museum
* National Organization for Women (NOW)
* Equality Now
* She Should Run
* UN Women
* Gender at Work
* Women's Foundation of California

What new year's brands stand out to you as you get ready to begin 2020?