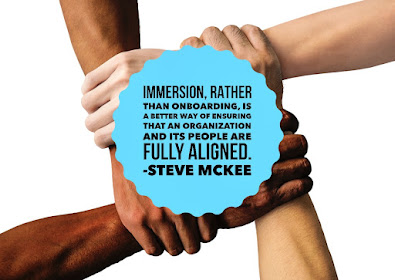 To quote Matthew Kobach (@mkobach), "Twitter is a key that unlocks thousands of doors, some of which you never even knew existed." As a member of the Twitterverse for 13 years, I always enjoy meeting new people and learning from them. I recently connected with Steve McKee and invited him to appear here on my Blog in a Q&A format for a discussion about corporate culture and the employee experience. Highlights of our conversation follow a brief introduction.

Steve McKee is the co-founder of McKee Wallwork, a nationally recognized marketing advisory firm that has twice been recognized by Advertising Age as Southwest Small Agency of the Year. He is the author of When Growth Stalls: How it Happens, Why You're Stuck and What to Do About It, an award-winning business book now published in four languages; and Power Branding: Leveraging the Success of the World's Best Brands, which has been called “the definitive book on modern branding” that “should be mandatory reading in every business school in America.” He also writes a popular monthly column for SmartBrief on Leadership and has been published or quoted in The New York Times, USA Today, and Investor's Business Daily, among others, and has appeared on CNBC, ESPN2, CNNfn, Bloomberg, and network television affiliates across America. He is a sought-after speaker at corporate and industry events.

QUESTION: You wrote a very interesting article recently for SmartBrief entitled, "No More Onboarding." Can you provide a brief overview?

STEVE McKEE: Sure. We do an increasing amount of consulting in the corporate culture arena, and during one recent assignment, we kept falling back on the common term “onboarding” to describe deepening the connection between our client’s company and its employees. It felt too limiting, as if getting people “on board” was something that only has to happen ONCE, at the beginning of someone’s tenure. We all know that’s not true.

In searching for a better metaphor, we came up with “immersion,” which turns the concept on its head; instead of somebody stepping aboard a corporate vessel, the goal should be to get them to become the vessel over time. After all, what is a company other than its people?

The task is to move them from sticking a toe in the water (at their initial interview) to getting their feet wet, then becoming immersed up to their knees, hips, shoulders and, ultimately, their head. Every company will interpret those stages differently, which is as it should be. But it’s a better way of ensuring that an organization and its people are fully aligned.

TWEET THIS: Immersion, rather than onboarding, is a better way of ensuring that an org and its people are fully aligned. ~@SteveMcKee #DebbieLaskeysBlog

QUESTION: How can all members of the C-Suite care more about onboarding (or "immersion"), which directly impacts corporate culture and employee engagement?

STEVE McKEE: I think it’s increasingly going to be a by-product of what’s happening in the economy, given the talent shortage we’re facing and the demographic seeds (births below replacement rate) we’ve sown. Good people are getting harder to find — and more profitable to poach — which puts a premium on retention as well as recruitment. We’ve all seen the research that indicates while compensation is important, compensation isn’t what keeps people at their jobs. Engagement does.

If you think about sticky corporate cultures like Southwest Airlines and Ritz-Carlton (and, I’m pleased to say, McKee Wallwork), the strength of their cultures makes them more like a club — not as sticky as the Marine Corps (Semper Fi for life) or rabid Texas A&M fans — but the same principles apply.

It’s imperative to cultivate a sense of belonging, which not only makes your staff more stable, but happier and more productive as well. The more enlightened companies increasingly pursue this thinking, the more all companies will come along.

TWEET THIS: Compensation isn't what keeps people at their jobs. Engagement does. ~@SteveMcKee #EmployeeEngagement #DebbieLaskeysBlog

QUESTION: How do you recommend that employees who are forced to work in silos by their leadership teams overcome the silos and work together?

STEVE McKEE: Silos provide an interesting metaphor because just as grain is stored on a farm or coal near a railroad, corporate silos protect a company’s resources from the elements and ensure a ready and steady supply of energy. But silos are only as valuable as they are accessible, and the greater the inflow and output, the more valuable they become.

Rather than thinking in terms of tearing down silos, I think it would be beneficial to consider how to better activate and engage one with another. The combination of deep expertise and efficient exchange is a powerful mix. In other words, silos don’t need to be overcome but leveraged. Sometimes flipping a negative metaphor into something positive unleashes a wave of creative connections. It unlocks something in the brain.

QUESTION: Many years ago, I had a boss who told me to “lower (my) expectations” when it came to the employees who reported to me. How would you have responded in that situation?

STEVE McKEE: Well, in terms of my immediate response, I probably would have kept my mouth shut — I’ve learned that saying what immediately comes to mind usually does me more harm than good. But it would have frustrated me; I have lofty expectations for myself and that naturally translates to my expectations of others.

That said, I think I would try to flip the statement over in a way similar to the silos metaphor. Rather than lowering my expectations, I might try to view the challenge as bettering my understanding of how they’re more likely to thrive. Some people like to keep lists and a clean desk (me), while others have, ahem, a different relationship with time and space. It doesn’t mean they’re wrong, it just means they operate differently than I do.

One of the things that distinguishes a leader from a tyrant is the willingness to step outside of themselves and view things through unfamiliar lenses. That may sound altruistic, but I think it’s in the leader’s, and the company’s, economic interests to do so. Humility and a willingness to pause and consider what’s really going on in a situation can avert a great deal of pain.

TWEET THIS: One of the things that distinguishes a leader from a tyrant is the willingness to step outside of themselves and view things through unfamiliar lenses. ~@SteveMcKee #LeadershipTip #DebbieLaskeysBlog

QUESTION: One of my favorite leadership quotes is from author and consultant Mark Herbert (@NewParadigmer on Twitter): "Leadership doesn't require you to be the smartest person in the room. It requires you to block and tackle for others." What does this quote mean to you?

STEVE McKEE: I am convinced that the best leaders don’t lord their authority over others but serve them. That doesn’t absolve them from making tough decisions, enforcing discipline when necessary, and calling the shots; it’s more of a mindset.

I’ve given a speech a couple of times called “The Perilous Pursuit” which postulates that the aspiration to leadership, and the process of becoming a leader, can itself be corrupting. Nietzsche said the most basic human motivation is to impose our will on other people. We don’t necessarily have to get that dark about it, but it is true that the reason we so often want to lead is that we see a better place and we want to take our people there. We see the way things ought to be. If we’re leading, we get to take things in the direction we want. That’s where the peril arises.

But what’s more satisfying: telling one of your employees what to do and seeing them do it, or seeing one of your employees doing something without having been told? Is it more satisfying to command someone, or not to have to? The key to good leadership is understanding the difference between power and influence. Power is about control. Influence is about self-control. Power is ephemeral. Influence is lasting. There’s an intoxication associated with power, but there’s a deep satisfaction associated with influence. And influence comes from humility and selflessness — blocking and tackling for others included.

My thanks to Steve for sharing his amazing insights and for appearing here on my Blog.