Good Leadership Is NOT Defined By Gender 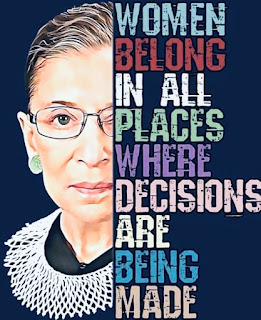 To quote Matthew Kobach (@mkobach), "Twitter is a key that unlocks thousands of doors, some of which you never even knew existed." As a member of the Twitterverse for nearly 13 years, I always enjoy meeting new people and learning from them. After reading a recent article written by Amy Diehl for Harvard Business Review, I connected with Amy and invited her to appear here on my Blog in a Q&A format.

Before I introduce Amy, a reminder that March is Women's History Month, a special time to honor the role of women in American history. While many industries have shown increases in the presence of women, there are still many ladders to climb and ceilings to shatter. One such environment is the C-Suite and top leadership roles.

Amy Diehl, Ph.D. is Chief Information Officer at Wilson College and a gender bias expert, researcher, and consultant. She’s a sought-after speaker for conferences, workshops, guest lectures, and panels. Her work has been published in academic journals and book chapters as well as in business and popular press, including Harvard Business Review, Fast Company, and Ms. Magazine. She is currently co-authoring a book on gender bias. Connect and follow on Twitter @amydiehl and on LinkedIn at https://www.linkedin.com/in/amy-diehl.

To remove roadblocks, governmental officials must create policy and law that contributes to women’s equality, such as equal pay, paid parental leave, universal Pre-K, and subsidized quality childcare. Organization leaders must identify gender biased practices within their companies and work to eliminate them. Assessment tools like the Gender Bias Scale for Women Leaders, developed by me and co-authors, can identify specific aspects of bias (e.g., male culture, lack of mentoring, salary inequality, workplace harassment, etc.), so that they can be rooted out.

QUESTION: You wrote an article for the Harvard Business Review entitled, "When People Assume You're Not in Charge Because You're a Woman." Can you share the highlights and how we, as women and as a community, can right this wrong?

In the article, Dr. Leanne Dzubinski and I shared many tips to overcome role incredulity. They boil down to prominently communicating women’s titles and correcting mistaken assumptions when they happen. For example, titles should be used when introducing women, in email signatures, and on door signs and name tags.

If you see a colleague’s role misidentified, speak up on their behalf: “Zara is our vice president of engineering.” While it may feel awkward when it happens to you, don’t be afraid to correct the mistaken person: “I’m the director of this department.” These are little steps, but they go a long way to eliminating these gender stereotypes.

QUESTION: Janet Yellen, the current and first female Secretary of the Treasury, has been described as, "A proven leader who knows how to build consensus, the kind of person who makes everybody around her better." What three characteristics are necessary to create a consensus-builder?

AMY DIEHL: Consensus building is important for all leaders. People feel more empowered and willing to contribute to solutions when their ideas are heard, considered, and incorporated into the outcome. To create consensus, leaders must proactively ask for input, really listen to ideas, and be flexible and willing to adapt.

TWEET THIS: To create consensus, leaders must proactively ask for input, really listen to ideas, and be flexible and willing to adapt. -@amydiehl #LeadershipTip #DebbieLaskeysBlog

QUESTION: When I was in graduate school in the mid-1990's, one of my tenured professors said to the class, "Women don't belong in grad school. They belong at home in the kitchen" How would you, as a gender bias expert, have responded?

AMY DIEHL: It's terrible that a professor said that to you! When influential people put out prescriptive stereotypes, it can cause both men and women to keep traditional gender role boxes around themselves and others. I would have responded with this quote from former Supreme Court Justice Ruth Bader Ginsburg: “Women belong in all the places decisions are being made.”

We all suffer the negative impacts of women not being in places of influence. I think of the example of Dr. Katalin Karikó. Dr. Karikó worked on messenger RNA research at the University of Pennsylvania from 1989 to 2013. During that time, the university put up roadblocks to her work, which included denying her tenure in the mid-1990’s. She stayed in an adjunct role, eventually publishing her breakthrough mRNA research in 2005. She left Penn in 2013 to join BioNTech, and her research was used to develop Pfizer-BioNTech’s mRNA COVID-19 vaccine. Dr. Karikó’s research is mitigating the impact of this worldwide pandemic, but just think what would have happened if she had left Penn when they demoted her out of her tenure-track position. And think about how much more productive she could have been if Penn supported her work. For the betterment of our world, we need women to be able to fully contribute in all realms of society.

TWEET THIS: For the betterment of our world, we need women to be able to fully contribute in all realms of society. -@amydiehl #NoCeilings #DebbieLaskeysBlog

QUESTION: Susan Colantuono (@SusanColantuono on Twitter) wrote, "If women aren’t proportionately represented throughout your organization, you aren’t facing a women’s issue, you’re facing a talent development issue with business implications." What do you think about that statement?

AMY DIEHL: I agree. Too often, organizations use the excuse, "But there are no qualified women here." Organizations should examine their job and promotional qualifications, which are often biased in ways that keep women out. An example is the cybersecurity industry which often sets minimum job requirements of expensive and time-consuming certifications. A way to bring a broader set of individuals into this industry is to hire people into entry-level roles with no certifications required and then pay certification fees and allow employees to use company time to earn them.

The business implications of keeping women out of leadership, technical, and other male-dominated roles are huge. The organization loses out, women lose out, and society loses out. Even if your business is already thriving, think of how much more successful it could be (profits, breakthroughs, and innovations) if women were equally represented and fully supported in all business units.

TWEET THIS: The business implications of keeping women out of leadership, technical, and other male-dominated roles are huge. -@amydiehl #NoCeilings #DebbieLaskeysBlog

TWEET THIS: Think of how much more successful your biz could be if women were equally represented and fully supported. -@amydiehl #EqualityForWomen #DebbieLaskeysBlog

My enormous gratitude to Amy for appearing here on my blog and sharing her inspiring perspective!