When Ads Take Center Stage: A Post-Game Review of the Brand Bowl 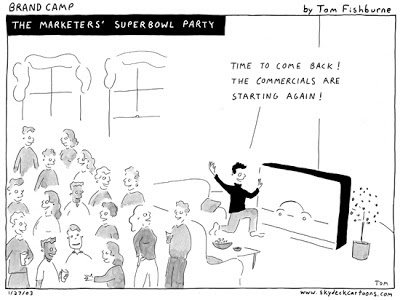 There is no dispute that the annual Super Bowl game is one of the most-watched television events around the world. But for those of us who live and breathe all things marketing, the final football showdown each season provides a different focus, and that focus costs a pretty penny. The incredibly high priced ads that grace the TV screen during the game have become known as the Brand Bowl, and I'm thrilled to reprise a review of these ads with Julia Carcamo.

As a brand marketing professional, I recall the majority of the ads. What about you? Read about my faves and flops, and then Julia chimes in. A few quick notes before we begin: Julia's bio precedes her comments below for those who don't recall last year's post, and I encourage you to visit her blog and connect on Twitter; if you missed any of the ads, a link listing all ads is provided at the very end of our joint post; and lastly, tune in later this week for my analysis of memorable tweets and how Twitter may be the place to focus ad dollars for next year's Super Bowl.

Since enough has been said and written about the power outage, here we go...

My favorite ad was "Brotherhood" from Budweiser. The Clydesdales always tug at the heartstrings, and this ad harkened back to the post-9/11 ad as well as the one where the Dalmatian taught a colt to become a member of the Clydesdales traveling team. This ad did not disappoint.

I was also impressed by Jeep's "Whole Again" ad with a voiceover by Oprah (although notably absent from Chrysler advertising was Clint Eastwood - was this due to the chair performance at the Republican Convention?). The ad thanked America's armed forces.

Best Buy's "Asking Amy" ad with Amy Poehler was entertaining because she asked questions that many customers probably want to ask but are too embarrassed to ask.

GoDaddy's "YourBigIdea.co" ad worked well because it showcased exactly what the product was. GoDaddy should have stopped with that ad because its other ad "The Kiss" was too far removed from the product's message.

Oreo's "Creme vs. Cookie" ad was cute, and since there was an amazing Twitter follow-up during the power outage, Oreo scored a touchdown. But more about that later this week.

But this year, there seemed to be more flops than faves...

Since I recently gave up my BlackBerry for an iPhone, I was eager to see the BlackBerry ad. But, it disappointed since the focus was what it could NOT do vs. what set it apart from the competition. iPhones and Androids, it doesn't look like you have much to worry about.

VW made a lot of pre-game noise with its "Get In. Get Happy" ad, and I won't get involved in the discussion about whether or not it was inappropriate. I will simply ask, what happened with the creativity seen in ads during the last two years?

My favorite ads in the past have come from Coca-Cola, but not this year. In addition to using an old ad, "Security Camera," I have to ask, where were the polar bears? Someone somewhere suggested using the mirage theme and three competing groups. But, Coke's servers got overloaded and crashed during the Super Bowl, so the Twitterverse couldn't even vote online for a favorite group.

I also wondered during the game, where were Ford, Chevrolet, and even Facebook and Google?

Now, please welcome Julia Carcamo back to my blog. After last year's Super Bowl, we shared a joint post on my blog and also on hers. While we watched the ads from miles apart, we have discussed which were hits and misses. Julia is the Vice President of Brand Marketing for Isle of Capri Casinos, one of the most seasoned companies in the regional gaming entertainment industry, operating 15 casinos in the US, and she's part of the team responsible for the strategic planning behind the reintroduction of the iconic Lady Luck brand as well as the repositioning and creation of other Isle brands. Without further ado, here's Julia...

There are a number of reasons why this year's big game was important to me. First and most important, there is the economic impact of the game on my hometown of New Orleans. Second is the opportunity to once again review the collection of ads in this year's game with Debbie Laskey. My winners are a mix of ads that moved me, ads that I felt were on brand strategy, ads that made me smile, ads that reminded me how much I miss New Orleans, and the ads my fellow co-workers found to be the best. Here they go, in no particular order.

Taco Bell's interpretation of “Cocoon” made me smile, and it made an entire bar full of people stand up and cheer. For that I say, "Viva Young."

Hyundai's ad "Stuck" spoke to me every single time I've been behind someone on the road leaving behind mementos of their time in front of you. I usually try to drop back a little further. Now I see there is another turbocharged option.

Hyundai scores again in this homage to “Ferris Beuller's Day Off." Who wouldn't want to give their family an Epic Playdate?

Bravo Jared and Bravo to Subway for delivering the point that always seems to be the downfall of the diet du jour...keeping it off. No flash. No sizzle. Just the heart of the message.

Was it a good commercial, or do I just love the vibe of New Orleans? Either way, I'm in for the Mercedes CLS Soul spot...so much so that I might even forgive the billboard across from Napoleon House.

It used to be that the first break was the marquee spot. Chrysler, however, has repositioned halftime as the "it" placement. Most purists would argue that they are forgoing a spotlight on their products. Some might say they are positioning themselves as the all-American option. Ford, anyone?

In a past life, I sold radio. That station featured a segment by Paul Harvey. Chrysler's Dodge Ram salute to American Farmers was very moving to me.

My tearjerkers: I'm not a St. Louisan, but the Budweiser Clydesdale spots have always been among my favorites. There is just something about them that makes me feel un-American if I don't cry. This spot seemed to be a hit among most of the marketers I work with on a daily basis.

As the officials on the field say, "Failed to convert." That penalty goes to Go Daddy (even though they did somewhat redeem themselves with "Your Next Big Idea." Go Daddy's Perfect Match spot just made me feel a little dirty. Even if you weren’t in the same room, the sound of that kiss was enough to send shivers down my spine. To quote one of the marketing directors I work with, "I don't like the way they subjugate web developers." Also, missing the point was Toyota. I guess Kaley Cuoco is the latest hot property but I was so unmoved that I had the name of the car make and model wrong when I wrote this sentence. Sorry Toyota. I guess your wish wasn't granted. Honorable mention goes to Kia's Space Babies. Babylandia looks so much more interesting than being slung in a sheet flying through the air on the beak of a stork!

Of course, this Super Bowl will go down in the record books for creating the biggest delay during the game due to a power outage. Although media maven and social media expert alike always tout extending your ad buys into social, Oreo and Tide were fast to take advantage of the hiccup. Clever, timely, and on brand, they might be my winners for the night.

Here's the link if you'd like to watch the ads again:
http://www.nfl.com/superbowl/47/commercials

Image Credit: Thanks to Tom Fishburne for use of his cartoon with this post. Tom is the Founder and CEO of Marketoon Studios, a content marketing studio that helps businesses reach their audiences with cartoons. Check out his work at http://tomfishburne.com.
Posted by DebbieLaskeyMBA