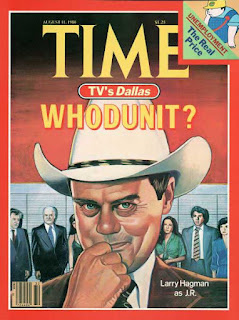 In TV land, many shows are recycled, re-issued, and re-made. That's just show biz, as the expression goes. But while some shows attempt a second life, most fail because viewers miss the original stars or original story lines. But this summer, one of TV's most popular shows makes a comeback. Run the familiar music: Dallas has returned.

Who hasn't experienced drama in his or her life? Part of the appeal of Dallas was that everyone could identify with one or more characters on the show.

As millions of other fans, I will always remember the shower scene in May 1986, when Bobby exited the shower. Since his character had died at the end of the previous season, the shower scene brought him back to life and literally erased most events from season nine (1985-1986). This deception was so cleverly orchestrated by the show's producers, director, and actors, that it will never be able to be repeated on television again. Viewers are much savvier today.

The new version of Dallas airs on TNT on Wednesday nights and features three of the original characters portrayed by the original actors, so J.R. (Larry Hagman), Bobby (Patrick Duffy), and Sue Ellen (Linda Gray) will be part of the action. It’s hard to predict if this version will be as successful as the original, but there is no doubt that these familiar actors will resurrect their drama.

So what can we learn about marketing and branding from the return of Dallas? First, how many shows would garner excitement if they re-appeared many years after their final episode? Second, how many shows actually became a brand that promoted a way of life and a state? And finally, ask yourself, what if your business went on a 20-year hiatus? Would your customers, vendors, partners, and other supporters embrace you as fondly as the fans of Dallas? If not, think how you can improve your service or product today – just in case.
Posted by DebbieLaskeyMBA