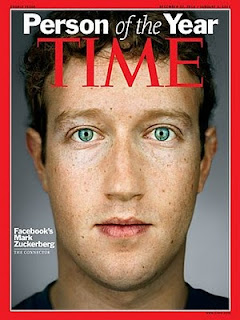 Since 1927, TIME Magazine has chosen a man, woman, or entity that, in the words of the publication, “for better or worse, has most influenced events in the preceding year.” TIME has made it absolutely clear that its list is not an academic or objective study of the past but, instead, a contemporary perspective of what was important during the year just ended.

The winners list contains heroes and villains, objects, entire generations, and oddities. Starting in 1927 with aviator Charles Lindbergh, other famous individuals include Adolph Hitler (1938), Astronauts Anders/Borman/Lovell (1968), and Ayatullah Khomeini (1979). Some of the more unusual winners include:

Did you predict who TIME would pick for 2010? This year’s Person of the Year is Mark Zuckerberg, the founder, CEO, and face of Facebook. At 26, he is the second youngest to receive the honor. TIME explained his importance as “creating a new system of exchanging information” and “changing how we all live our lives.”

When Zuckerberg was a sophomore at Harvard University, he created Facebook for his fellow college students. Over the years, adults the world over have joined Facebook, and the company surpassed MySpace as the number one social network two years ago. Facebook users now post a billion pieces of content including photos and messages on a daily basis, according to TIME’s announcement. Facebook has maintained ad prices and also makes money from a credits program which lets people buy virtual items for online games. However, everything in the Facebook world is not golden. As Facebook has expanded, so have users’ concerns about privacy. After lawmakers and advocacy groups complained that Facebook shares too much personal data, the company introduced privacy controls in May and said it was reducing the amount of user information that is publicly available – but information security professionals do not agree.

While there is no question that Facebook has evolved, and many people have Facebook accounts for personal or business use – including this blogger – there were other candidates better suited for this recognition:

Oh well, only 12 months until TIME announces the Man, Women, Person, Object, or Oddity of 2011. Let the countdown begin!

To read the article from TIME Magazine: