How Will Your Brand Recognize September 11th? 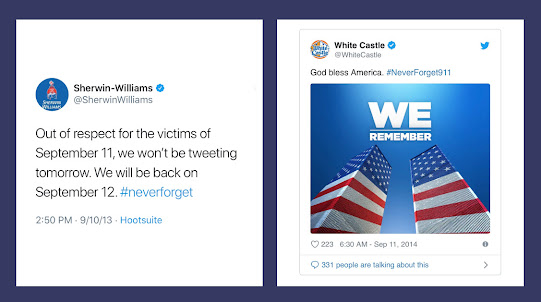 If you were alive on September 11, 2001, your life was forever changed by the events in New York City, at the Pentagon, and in rural Pennsylvania. Terrorism arrived in the United States - and the country would never be the same.

This September 11th, also referred to as "9-11," marks the 21st anniversary of that tragedy, and while war and terrorism still exist, we will always remember the people who perished on that September morning, and we will always celebrate with gratitude the first responders who rushed into harm's way.

In the days following September 11, 2001, most brands added an American flag to their website homepages with messages of condolences for the lives lost. Most brands wanted to present unity to their website visitors. Since social media did not exist like it does today, there were no Twitter, Facebook, or Instagram posts that gained hundreds of thousands of comments, likes, or retweets.

But today is different. Social media has provided incredible opportunities for everyone's voices to be heard. There are inspiring and creative ways for brands to commemorate September 11. There are traditional marketing avenues, such as, email marketing, website messages, and advertising. And there is also social media. Brands might even choose to combine efforts with aligned brands or even competitors.

On September 11, 2012, President Barack Obama proclaimed the date as Patriot Day and National Day of Service and Remembrance. While American government buildings fly their flags at half-staff, Americans are urged to perform a day of service and make a positive difference in their communities. This presents an opportunity for brands to partner with nonprofits in a myriad of ways - both by creating volunteer opportunities and by creating marketing messaging.

While some in the marketing arena think it best for brands to remain silent on September 11, the reality is that consumers look to brands to make an emotional connection. And when a connection is made, often long-term loyalty results. So, what will your brand do to recognize September 11th?