The Glue Between Culture and Leadership 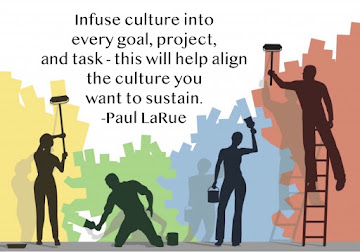 Anyone who spends time in social media has one or two favorite platforms. Some may prefer using Twitter, some may prefer using Instagram or Facebook, and some may prefer an obscure site that fits a specific industry. Many of us who use social media as a marketing tool to build our employer's brand or our personal brand have also met an amazing array of people. One new acquaintance is Paul LaRue, who I met on Twitter, and we recently had a discussion about corporate culture, leadership, and the impact of COVID-19 on both. Highlights follow below Paul's bio.

Paul LaRue is a leadership consultant with over 30 years in the hospitality industry. Aligning a focus on culture and connection within the workplace, his work is guided toward creating leaders who do what is right by their people while challenging conventional norms. His writing is featured on his blog The UPwards Leader, as well as the leadership sites Connection Culture and Lead Change Group. Connect and follow Paul on Twitter @paul_larue.

QUESTION: From your experiences since March, how has the Covid-19 pandemic impacted the employee experience?

PAUL LARUE: The current Covid pandemic has shifted everything that most leaders thought they knew. Security among the workforce has been shaken, and employees are looking for leaders who are more understanding of what individuals are going through than in staying the normal course of business. Employees want more assurance of security, not just from the changed workplace dynamics that the pandemic presents, but also in the tectonic shifts in society, having leadership who value differing viewpoints. The leader who balances this with navigating his/her/their organization through the coming year will be effective in meeting these converging and colliding needs.

QUESTION: What are the three key elements that a leadership team can do to create and maintain a positive corporate culture?

PAUL LARUE: First, is to keep your cultural values in front of you and refer to them at all times. The more that people reinforce culture on a conscious level, the more it will start to permeate into the subconscious and into the DNA of the individuals on the team. Whether reading them weekly, focusing on a core culture trait, or having culture checks among team members, this is usually the best foundation on which to build culture from.

Secondly, is to infuse culture into every goal, project, and task to help align the culture you want to sustain. When all work, in all departments, is aligned to culture, this will build the organization's culture and brand both externally as well as internally.

The last component is to hold each other accountable for culture. Accountability is always seen as top down, but the company and leadership that allow top levels to also be held accountable will create an equality of coachability where only a positive culture can exist.

TWEET THIS: Infuse culture into every goal, project, and task - this will help align the culture you want to sustain. ~@paul_larue. #LeadershipTip #EmployeeExperience

QUESTION: What book should every leader read, and why?

PAUL LARUE: Without a doubt, it has to be Michael Lee Stallard's "Connection Culture -- The Competitive Advantage of Shared Identity, Empathy and Understanding at Work." I just read Mike's latest edition, and a few weeks ago, we discussed how the book has evolved. When it came out about seven years ago, it was a book needed for the time. I believe it's even more imperative that every leader reads it now if we're going to meet the needs of employees that are committed and connected – if any sustainable success is to be had. People are lonelier in the workforce now than ever before, especially since Covid appeared, and the principles in this book are what every leader needs to achieve.

QUESTION: You wrote a blog post entitled, “Start the Week by Reinvigorating Culture.” What are the three most important things that a leader should do to reinvigorate his/her/their culture, and why?

PAUL LARUE: I would say it's almost exactly the same as the previous question about maintaining and creating a positive culture, but with more emphasis on the leader allowing others to hold themselves accountable. I applied that principle in my last role and it took a year-and-a-half for people to understand there was true accountability and willingness to learn from it and not be defensive.

So many times, I see organizations where leaders speak to culture, but don't embody it themselves. This creates a hypocrisy and distrust that leads to disengaged employees and other toxic behaviors.

I read a book years ago by an entrepreneur who created a culture that if they didn't support the values their organization was built upon, there were actions the employees could take to remove him. And this was the owner who created a culture where he needed to be aligned or he would be removed from his own company! Having that type of commitment to culture over any individual, even yourself, is what is needed from leadership today. (Note: the book referenced was “Made in America” by John McCormick.)

QUESTION: Whitney Johnson’s (@JohnsonWhitney on Twitter) best teambuilding advice is to be a CEO, defined as a Chief Encouragement Officer, because “You don’t win unless your team does.” How would you apply that advice when different departments work in silos and don’t share project updates?

PAUL LARUE: I think that largely depends on the dynamic of the individuals in each department, but encouraging each team to be open to another person from a different department is a common step toward breaking down those walls. Every time I've coached leaders to create this, the awakening of understanding from the person outside the department to truly hear and understand what the other team is doing becomes a cornerstone for empathy and teamwork.

It seems as if once someone understands the pressures you and your team face, and the nuances of the work and skills dependent on the team, there becomes a validation that opens up a team in silo.

Sometimes it happens quickly, sometimes it takes much longer, but having the outside employee be a positive, and not threatening, force to understanding the team and how to work cross-functionally is the best recipe for opening up the organization.

My gratitude to Paul for sharing his insights.