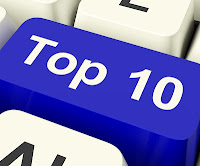 With 2012 now history, it’s time for my “Top 10” marketing highlights list. What campaigns were great, and which were duds? What do you remember from the 2012 marketing reel?

With a quick thanks to David Letterman for the format, here’s my list:

Number 10:
Hashtags appeared everywhere on television. No matter what program was on the screen, there was that darn little hashtag in one corner to facilitate social media conversations. Here are just a few: #TheVoice #SharkTank #BigBangTheory #60Minutes and #TonightShow.

Number 9:
After 244 years, The Encyclopaedia Britannica ended its print edition to focus on digital products.

Number 8:
The 100-year anniversary of the Titanic disaster was observed. This disaster continues to capture people’s imagination especially since James Cameron filmed the ship at the bottom of the Atlantic Ocean and memorialized the story in his epic Oscar-winning film.

Number 7:
RIM announced that it would leave the consumer market and instead focus on the enterprise (business market). This formal decision was not a surprise to those who watch the tech world, but after creating a product category with the Blackberry, this end of an era taught all a very important lesson: you must listen to and learn from your core customers.

Number 6:
Pinterest emerged as the social media darling. The site created a buzz while still in its beta phase and with membership by invitation only. Different from other social sites, Pinterest’s focus is visual, and users share pins to themed boards.

Number 5:
Facebook’s initial public offering was the largest in terms of dollars and most talked about IPO in NASDAQ history. However, despite problems on the day of the IPO and decline of the stock’s value in the months since the IPO, Facebook continues to grow its membership. During 2012, Facebook welcomed its one billionth user. However, information security (infosec) professionals still question Facebook’s attention to user privacy versus who will have access to user data.

Number 4:
Some redesigned logos were unveiled during 2012. Twitter launched a new logo without its company name, just the blue bird. Others included JCPenney, Wendy’s, eBay, and Microsoft.

Number 3:
“Dallas” returned to television (TNT) after a 20-year absence with three original actors portraying their original characters: JR, Sue Ellen, and Bobby. Whenever a television show is recreated, fans wish for elements from the initial version. But this new version was so similar to the twists and turns of the original that it made this blogger a quick fan.

Number 2:
While the London Olympics closely followed the Royal Wedding of Prince William and the Queen’s Diamond Jubilee, there was plenty of interest. Despite complaints from locals, tourists traveled from all over the world. The world’s attention was on London for the events, and the XXX Olympiad went off without a hitch. From a marketing perspective, there was an increase in tourism throughout the UK, an increase in buying British products, an increase in fans for the James Bond brand (due to the memorable arrival of the Queen and James Bond at the Opening Ceremonies), and an increase in positive attention for the British Royal family. The strange logo created conversations but didn’t damage the integrity of the Olympics.

Number 1:
After the death of Steve Jobs in 2011 and rumors that Apple could not survive without him, the company unveiled its newest phone, the iPhone 5. Bigger, better, faster, and without a doubt, something all iOS fans can’t get their hands on quickly enough – and something that new users of Apple products dream about.

What would you add to this list? Here’s to 2013 and another year of marketing highlights. Happy New Year!
Posted by DebbieLaskeyMBA