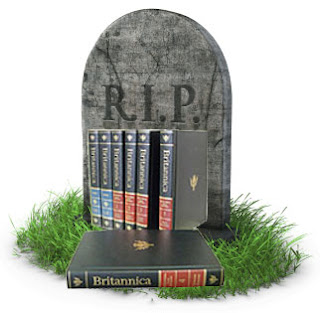 Did you hear the recent announcement that the 244-year-old Encyclopaedia Britannica would cease its print editions? This means that the 32-volume set would no longer sit on people’s home library shelves or school library shelves. As one who often turned the pages of this amazing set of books during my youth, I was extremely saddened by this news.
First, the depth of the information and the quality of the photos, drawings, and maps were second to none. They took me to places that I could only dream about, from animal safaris in Africa as far away as the moon. They showed me in-depth scientific drawings and detailed maps that explained how complex machinery worked. They featured photos and images of people from history in places that I could only imagine. Somehow, holding a heavy book and physically turning the pages that contained all of this information was a special experience – something that a modern smartphone or tablet cannot capture.
Second, there was no surprise that the publishing industry was going through a metamorphosis – similar to how a caterpillar becomes a butterfly. Some tech industry experts would even describe the change to be just as dramatic as that of the caterpillar due to the fact that so many newspapers are closing their doors and going out of business. Where was the leadership team at Encyclopaedia Britannica during the last 15 years as the Internet grew up?
Third, the evolution of the digital ecosystem presented a plethora of options for Encyclopaedia Britannica. The Encyclopaedia Britannica could have partnered with Google or an earlier search engine and provided content. This financial arrangement could have kept the print editions in production. The Encyclopaedia Britannica could have offered content on a tier basis, similar to The New York Times and other news entities who offer online content for a fee. There could have been daily free content with weekly, monthly, or per article/topic rates. Note, an Encyclopaedia Britannica app is available for the iPad, iPhone, or iPod Touch at the iTunes store.
Lastly, based on changes in education, where was the marketing arm of the company? While it provided specific websites for K-12 schools, universities, public libraries, and consumers, why wasn’t Encyclopaedia Britannica front and center with its product offering? Where were the corporate sponsorships and strategic partnerships?
There had to be better ways to integrate technology with what appeared to be an outdated business model. But any way that you look at it, this is a disappointing consequence of technology. However, while continuing to ponder this news, I was reminded that fans of horse-drawn carriages may not have been too happy when the first automobile appeared with its noise and engine smoke. Today, most of us couldn’t exist without modern transportation.
Image courtesy of The Mac Observer.
Posted by DebbieLaskeyMBA