140 Characters CAN Impact Your Business! 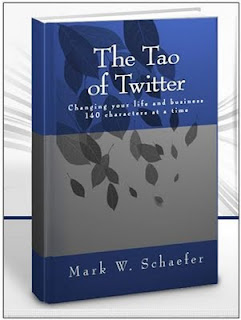 Those of us who spend a great amount of our day tangled in the social web sometimes forget what makes each site unique. So it’s a good idea to revisit the attributes of each site on a regular basis to remind ourselves how each can provide the best value for our time and business. Mark W. Schaefer does a great job of reminding us how Twitter can make an impact in 140 characters in his book, The Tao of Twitter. While it may have been written as an introduction to Twitter, it is a good read for those who have been in the Twitterverse for awhile – because we can see our own experiences in Mark’s stories.


Twitter, a micro-blogging site whereby users comment in 140 characters or less, has been in the news since it launched in 2006, but it really made its presence known in the mainstream media when the site experienced significant outages during August 2009 – and NBC news anchor Brian Williams discussed the outage on his Nightly News television broadcast.
As Mark writes, “There is a Tao to Twitter, a majestic random synergy that holds the potential to impact your life daily…if you know what you’re doing. [But] most people don’t know what they’re doing. They don’t grasp the Tao: a way or path or principle.”
Mark shares a myriad of memorable examples that prove how, without a doubt, Twitter can help your business to:
[1] Attract new audiences and potential customers, partners, and suppliers
[2] Follow news on your industry, market, competitors, and customers
[3] Stay on top of the latest research, opinions, insights, and competitive intelligence
[4] Strengthen new and existing customer relationships
[5] Open up low-cost marketing opportunities
Here are Mark’s questions and suggestions to make Twitter part of your marketing strategy and a competitive advantage for your business:
[1] Who are my target customers?
[2] Do they fall into distinct segments with different needs or interests?
[3] What are their goals as they relate to my business?
[4] What kind of information are my customers generally interested in?
[5] Who on Twitter regularly tweets this kind of information? Competitors? No one?
[6] What Twitter resources can be valuable to this (or each) customer segment?
[7] Use Twitter’s search function to perform real-time searches about your industry
[8] Offer helpful links and headlines that drive traffic to your main website
[9] Improve customer service by participating in conversations about your product/service
[10] Offer special deals, contests, and promotions on Twitter
[11] Showcase testimonial tweets as “favorites”
[12] Participate in or sponsor a chat or tweet-up based on your industry or niche
[13] Reinforce your brand with consistency (tagline, description, Twitter background, “voice” of your tweets, etc.)
As for the amount of time you should spend on Twitter, there is no easy answer. Only you can determine what works for your business. For newbies, try to spend 20 minutes a day – read, share, and learn from others. For those who have been part of the Twitterverse for a long time, Mark proposes that we take the Twitter 20-minute challenge – I had to laugh with his statement that “it’s easy to go down the rabbit hole” and read link after link. How many times have we all lost track of time?
Since Twitter’s “gold” can be described as “content,” Mark eloquently explains, “Content is the currency of the social web and sharing that content is the catalyst to new relationships and business benefits.” Twitter users fall into these categories: lead generator, customer satisfier, product development engine, problem-solver, lead for joint brainstorming session, storyteller, teacher – and you can probably think of many more.
For those who require visual explanations, Mark offers this description, “Think of the social web as a dinner party. If somebody only talks about themselves, their business and how great they are, you’re going to get away fast! But if a person shows genuine interest in you, and offers help without regard for their own personal benefit, you will like that person and connect with them.”
In a 2009 Time magazine essay, technology author Steven Johnson described the basic mechanics of Twitter, “As a social network, Twitter revolves around the principle of followers. When you choose to follow another Twitter user, that user’s tweets appear on your main Twitter page. If you follow 20 people, you’ll see a mix of tweets scrolling down the page: interesting new links, music recommendations, even musings on the future of education.”
When Johnson attended an event, he noticed that attendees in the same room were tweeting, but within 30 minutes, members of the Twitterverse who were not in attendance had joined the stream. “Injecting Twitter into that conversation fundamentally changed the rules of engagement. It added a second layer of discussion and brought a wider audience into what would have been a private exchange. And it gave the event an afterlife on the web. Yes, it was built entirely out of 140-character messages, but the sum total of those tweets added up to something truly substantive, like a suspension bridge made of pebbles.”
Over the last two-plus years, I have watched the pebbles of the Twitter suspension bridge and benefitted from Twitter: I have received invitations to write guest blog posts and to appear on radio shows. I have set up prospective business meetings that resulted in new business and also made new friends and business connections from all around the world – people I would never have had the opportunity to meet without Twitter – and all this resulting from 140 character messages. And, I admit, also by enduring the fail whale every now and then.
More about the book: http://www.thetaooftwitter.com
Follow Mark on Twitter: http://twitter.com/#!/markwschaefer
Read Mark’s Blog: http://www.businessesgrow.com/blog
Connect on LinkedIn: http://www.linkedin.com/in/markwschaefer
Connect on YouTube: http://www.youtube.com/user/MWSchaefer
Connect on Facebook: http://www.facebook.com/mark.schaefer3
Posted by DebbieLaskeyMBA