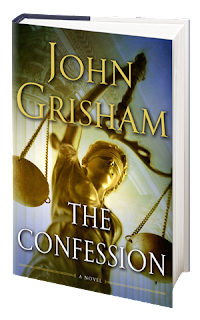 I am a lifelong fan of the legal thriller genre, thanks in large part to John Grisham. I enjoy the legal issues, the courtroom drama, and the attorneys’ arguments. But after reading Grisham’s latest legal thriller, The Confession, I realized that this story was not just a classic Grisham thriller - it also provided leadership lessons. Don’t worry, this post will not reveal any plot spoilers.

One of the main characters, attorney Robbie Flak, demonstrated attributes of an inspirational leader. He led his team by clearly assigning and defining tasks, elaborating action plans, and leading meetings. But most of all, he demonstrated an open door policy of communication. Everyone on the team knew what was happening with the trial at all times. He did not keep secrets. He did not tell some people some aspects of the case and other people other aspects of the case. He was an inspirational leader because he understood the value of his team and the importance of their working together as a cohesive unit.

When trial preparations are in high gear, and then the ensuing trail gets underway, there is no room for petty squabbles among team members. The legal environment is not the place for disagreements, name calling, pouting, or any other form of inappropriate business behavior. In The Confession, those negative behaviors were non-existent because Robbie Flak’s leadership style set the tone. Yes, there was no doubt Robbie was a typical lawyer with a volatile temper, a tendency to be dramatic, and a charismatic presence. But, he was able to rein in his team so that they believed in him, believed in his cause, and wanted to help him succeed for his client.

How many leaders can talk the talk and walk the walk of inspirational leadership and achieve the same results?